Reasons why burkhas should be banned forever

Here are just a few of them:
Reason No. 1: Great cover for suicide bombers to fly off to their 72 virgins in 72 pieces. Somalia - A male suicide bomber dressed as a woman attacked a university graduation ceremony Thursday in a small part of the capital still under government control, killing up to 19 people, including three Cabinet ministers and three journalists

Reason No.3 : Great cover to beat up somebody and make it impossible for the victim to identify you

Reason No.4: Great cover to raid jewellery stores, use  prams too The pram is also perfect for carrying weapons.

At one of the blogs talking about bukha bandits I found this very telling comment which shows the double standards of our society in letting muslims get away with anything and everything under the sun and granting no leeway whatsoever to anybody else.


What annoys me as a motorcyclist is some shops including Morrisons demand we remove our helmets when buying petrol in case we rob the filling station, when they have told me these people do not have to remove their burkhas. It was not people wearing crash helmets that did this bit people wearing burkhas. Yet they will continue to allow them to wear these coverings into their filling stations while I have to remave my helmet. Posted by Wayne Morris 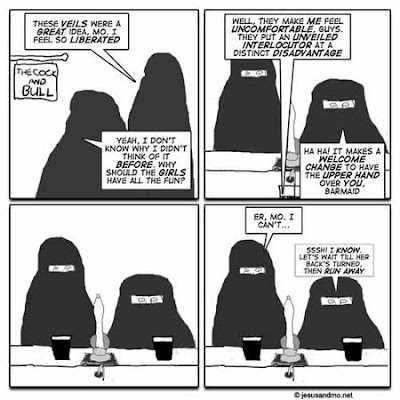