Christmas Day terrorism attempt was the 28th unsuccessful one

Sunday's chilling terror news wasn't the removal of a Nigerian man from the same Northwest Airlines route targeted by a would-be bomber two days earlier. Sunday's disruptive passenger just wasn't feeling well. No, the chilling news came from James Carafano, a defense and homeland security expert at the Heritage Foundation: The foiled Christmas Day plot, he says, is the 28th unsuccessful attempt to bring terror attacks to America since Sept. 11, 2001.

This attempt, which could have scattered passengers and plane parts across frozen Michigan tundra, may trace to Yemen. That's where thwarted martyr Umar Farouk Abdulmutallab claims he obtained his military-grade explosive from an al-Qaida associate.

President Barack Obama's administration has edged away from the phrase "global war on terror." But we wonder if the White House appreciates how well that Bushian notion of a long and widespread struggle helps to justify Obama's decision to further escalate U.S. efforts in Afghanistan...... 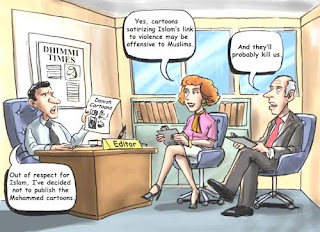 Guess what?! Some lefties seem to think that I am running scared and piddling away in my panties because of my recent posts on the latest terrorism act. These same idiots have been running around in circles like headless chickens screaming that AGW will destroy our planet and if something is not done about it they are going to be roasted to tiny little cinders with the heat expected our way, like maybe yesterday. What hypocrites!! These same people are so scared of muslims that they hide behind a political correctness demeanor which in reality is the worst form of cowardice imaginable. They know it and we know it.  Political correctness is a mask for cowards and cowards = leftists.