Jihadis and more jihadis.... a never ending string of jihadis

via: Drudge:  Cops fear that 25 British-born muslims are plotting to bomb Western airliners. The fanatics, in five groups, are now training at secret terror camps in Yemen.
It was there London-educated Umar Abdulmutallab, 23, prepared for his Christmas Day bid to blow up a US jet. The British extremists in Yemen are in their early 20s and from Bradford, Luton and Leytonstone, East London. They are due to return to the UK early in 2010 and will then await internet instructions from al-Qaeda on when to strike...... 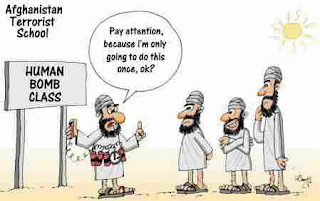 The solution is to stop muslim migration to the West. I know, I know... the good ones will also get the short end of the stick. However, do you see a better solution to this curse of a problem?
Posted by MariaS at 23:27