El Greco's birth name was Domenico Theotocopoulos and he was born in Crete of Greek origins. He moved to Venice as a young man to study painting under several well known masters of that time.

Most of his paintings belong to the Mannerism style which came on the heels of Renaissance art and lasted for about 60 years. Mannerism era paintings have more elongated forms and tend to show their subjects in more detail but in my opinion they can never be as "good as photographs" like the Renaissance pieces tend to be.

El Greco's paintings are found all over the world and some amazing ones can be found in the National Gallery in Washington, D.C.  Many of his works have ended up in private hands in Spain as El Greco moved there in his thirties and lived there until his death. 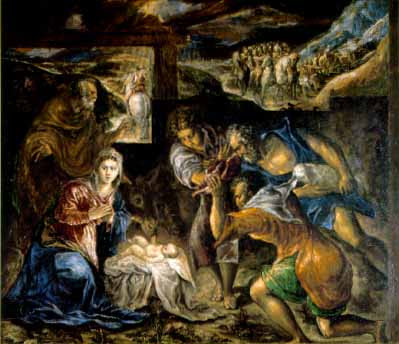 His much talked about paintings are "The Adoration of the Name of Jesus" and "Christ on the Cross". My favorite is "Baptism of Christ" as El Greco has gone batty showing in minute detail every crease, fold and every shadow in the clothing worn therein. It is a true piece of art

To see other  masterpieces of this artist,    go here
Posted by MariaS at 16:05