Titian's real name was Tiziano Vecelli and he was born in Venice. Titian started his painting career very early in his life when as a kid of twelve he was sent to work and paint in the workshops of other painters of his day. He showed his talent first in frescos, which can be found even to this day in churches throughout Italy, looking as fresh and clear as the day they were painted. Titian was also a very versatile painter. One week he would be painting religious themes and the next he would have huge overwhelming paintings depicting mystical, mythological creatures and landscapes. 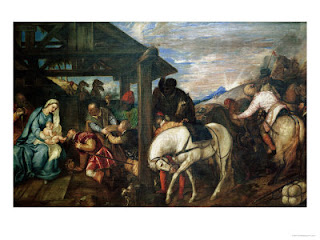 Titian had a penchant for the nude form and when you see a Renaissance painting with tonnes of creamy fresh hitting you in the eye from every corner, you are most likely looking at a Titian. If Titian threw some clothes on the figures for modesty, he would oft color them either white or with creamish tones. His many paintings and different versions of the goddess Venus and other mythological females will support my claim that Titian was a "pornographic" painter of his era. 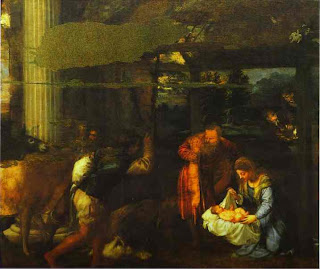 One of his paintings titled "Madonna with Saints", as the story goes, started as a Nativity painting but the family Pesaro who had commissioned the painting ( a large painting of over 100 " x 180" ) wanted their likenesses in the figures surrounding the Madonna and they also desired to see the faces of their favorite saints. Titian must have lost his cool and in the end the painting came out not showing either the magi or shepherds but like the one below: 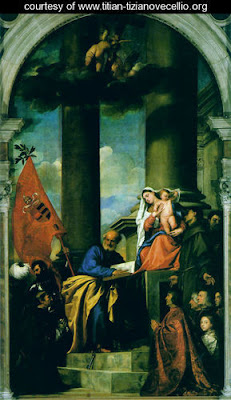