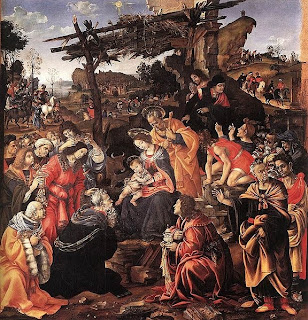 Forgot to post this one.  Had it sitting as a draft.

At the age of 15, Filippo Lippo joined the Carmelite Order in Florence and become a monk. As a monk in the Santa Maria del Carmine monastery he paid less attention to his holy orders and more to scribbling and painting in notebooks. After 10 years as a monk, Lippi suddenly disappeared from his religious constraints. 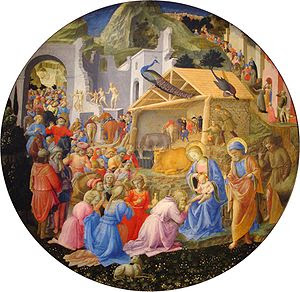 Romantic stories of his travels during the next two years are the subject of much amusement to art students as they seem to imply that Lippi made like a Casanova after his escape from the monastery. He returned to Florence and it is not clear how he was able to retain his monk status, but retain it he did and without giving up his amorous ways. One such story has him kidnapping a beautiful girl who was under the guardianship of nuns and having taken her to his house, he refused to let her go despite all the efforts of the nunnery. Some narratives claim that the girl Lucrezia was the mother of his son Filippino, who grew up to be as good a painter as Filippo. It is reputed that Lucrezia was the model for many of his paintings.

Check out his other paintings here
Posted by MariaS at 11:27