Domenico Ghirlandaio was the eldest of eight kids born to an Italian family. His family name was Bigordi, but he became known by the nickname "Ghirlandaio" which means "garland", a nickname that was given to him because he was the best designer of women's necklaces, work that he did for his goldsmith father before becoming a painter. 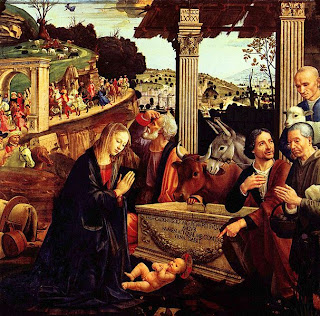 A little section of the Sistine Chapel has a fresco which was painted by Ghirlandaio depicting the callings of St.Peter and St.Andrew. His paintings showing the birth of Jesus are some of his most endearing works. Having worked in gold during his formative years, Ghirlandaio often used gold leaf in his painting. One such painting is the Adoration of the Shepherds shown here.
I was in Florence some years ago with a very knowledgeable youngster from my family who took it upon herself to give me a course at the Uffizi Gallery, at the end of which I became a firm fan of Renaissance painters. There are plenty of Ghirlandaio's paintings gracing the walls of Uffizi. The art there is ART in it's pure, sublime form, what you see today coming from most "artists" is pure garbage.

Ghirlandaio's painting "Adoration of the Magi" below is breathtaking, although not as famous as Leonardo's by the same name. 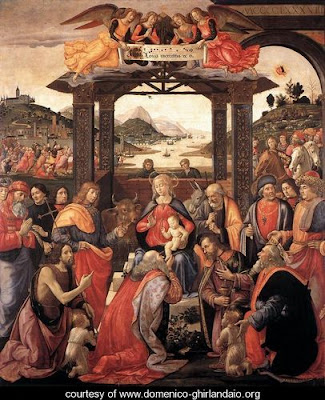 To see some of Ghirlandaio's works go here, and here
Posted by MariaS at 13:29