Raphael's given name was Raffaello Sanzio da Urbino and he was born in Urbino, Italy. Artistic talent ran in the family. His father was Giovanni Santi a painter of frescos whose works were found in the castles of the Italian noblemen. Raphael's parents died early leaving him an orphan in his early teens. 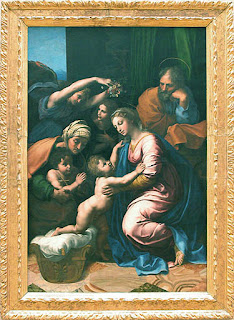 It is believed that the young Raphael designed, if not carried out, many of the frescos found in the churches of middle and northern Italy. His first important assignment came from the Vatican itself, a high honor in those days, when he was commissioned to design and paint the frescos in the Pope's library.

He died young at the age of 37 from a strange fever that lasted two weeks. He had never married, and some narratives say that Raphael had hopes of becoming a Cardinal, a post that would have given him extraordinary powers that the church enjoyed in those times and that was the reason why he remained single. 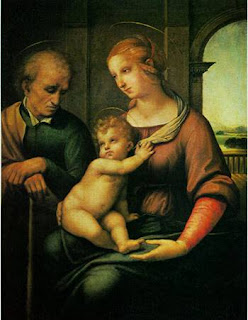 Some of Raphael's paintings remain disputed to this day as art critiques are torn between either crediting Raphael for the thousands of works which look like they are Raphael's but could very well be those of his students. Raphael would often give a design to his students and they then proceeded to enhance the original idea, the results tended to  look more like Raphael's creations. 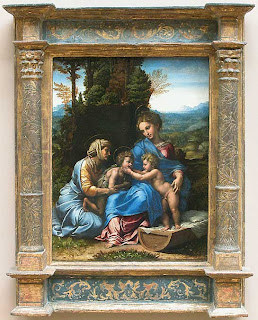 All four paintings here could be Raphael's or maybe not. The one showing Joseph as bald and beardless, I personally think is one of his students playing mischief and although this painting is attributed to Raphael, I have my doubts.

If you are a fan of Raphael's works, you will like to read this.
Posted by MariaS at 21:31