Andrea Mantegna was born in Italy. His father was a poor woodworker. Mantegna's talent was apparent early on and by the time he was 17 yrs old he had his own workshop and was receiving commissions from churches in Italy for designing and constructing altarpieces. He also managed to get a sought-after commission from Pope Innocent VIII and was delegated to paint frescos in some of the churches and chapels in Rome and Florence. One of his most famous painting is "The Agony in the Garden" which resides in the British Museum in London.

Here are two of Mantegna's takes on "Adoration of the Magi" 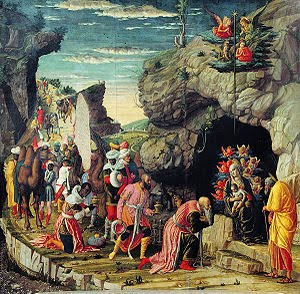 As I will show in this and in the forthcoming days leading to Christmas day, most of the artists used the same theme for their paintings. The reason was simple. Their patrons and buyers desired only religious themes and hence the artists would use the best loved scenes and oft times the likeness of the person commissioning the piece would find it's way in the painting itself as an onlooker or even as the main figure. 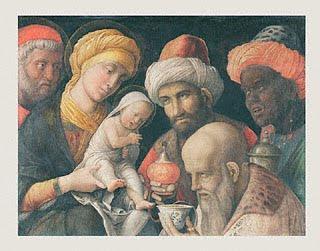 Below is his "Adoration of the Shepherds" 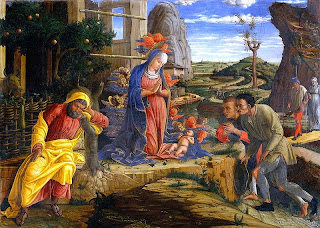 To learn more about Mantegna go go here
Posted by MariaS at 15:29