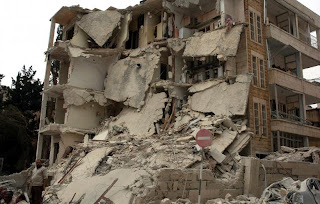 if this pic is not a fake.
I wonder how they got their hands on heavy weaponry.   Could it be that the Saudi money and USA's weapons stockpile have started  looking after their needs?   Nah... can't be.  Those two nations are known to never interfere in other countries. Have you ever known the USA to interfere in civil wars?  Mystery of mysteries, eh?!!

...At least eight people     were killed in three blasts that rocked the northwestern Syrian city of Idlib on Monday, state media and opposition activists said.

"An explosion shook the university neighborhood in Idlib," the Britain-based Syrian Observatory for Human Rights said.The group said up to 20 people had been killed, mostly members of the security forces. Authorities put the death toll at only eight and said some 100 people were wounded.

State news agency SANA said "terrorists" were behind the attacks that were carried out by "suicide bombers" in residential neighborhoods...........