Another "leading" Caliphated Britian's leaders in the news


My, my, my !!!!  Now isn't that so very shocking !!!  We never knew Britian had this many leaders in the making of the UK Caliphate, did we? 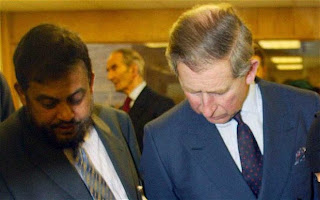 And here's England's prime dhimmi with the "spiritual caretaker of British muslims".  What a pair!

...Chowdhury Mueen-Uddin, director of Muslim spiritual care provision in the NHS, a trustee of the major British charity Muslim Aid and a central figure in setting up the Muslim Council of Britain, fiercely denies any involvement in a number of abductions and "disappearances" during Bangladesh's independence struggle in the 1970s.

He says the claims are "politically-motivated" and false.

However, Mohammad Abdul Hannan Khan, the chief investigator for the country's International Crimes Tribunal, said: "There is prima facie evidence of Chowdhury Mueen-Uddin being involved in a series of killings of intellectuals.

"We have made substantial progress in the case against him. There is no chance that he will not be indicted and prosecuted. We expect charges in June."

Mr Mueen-Uddin could face the death penalty if convicted...