In other news besides the unwanted election in Canada

2) Scottish govt who were all too eager to release the Lockerbie bomber in exchange for oil deals  are now  pretending to have been duped and wanting to interview the defected Libyan minister on Libya's involvement.    Stop with the lying already !!

5) The # 1 joke of this century is the entity known as the United Nations. Imagine appointing the world's worst human rights rogues to seats on the UNHRC ... can anything else be more unthinkable or funnier.

6) Daniel Pipes will appear on the Fox News Channel's "Glenn Beck" show, Friday, Apr. 1 at 5 pm EDT and then repeated on Apr. 2 at 2 am EDT. The prerecorded show, with Christopher Holton of the Center for Security Policy, devotes the entire hour to the dangers of Shari'a law to the United States.         h/t: Pam

9) Trailer of "Losing our Sons," a documentary film investigation into the first successful homegrown Islamist terrorist attack on American soil. This is the story of a young African-American man from Memphis who converted to radical Islam, went to Yemen for terrorism training, and came back to murder a young Army soldier in Little Rock, Arkansas.                               h/t: Irene


10) Citizenship and Immigration has signalled it intends to strengthen the law to address concerns about marriage fraud and marriages of convenience. The department has published what’s called a “notice of intent” that it wants to strengthen the Immigration and Refugee Protection Act to make it more difficult for people to use marriage as an easy way to become a citizen. 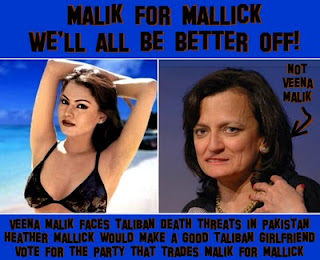 The Pope and Michael Ignatieff are on the same stage in Rogers Stadium in front of a huge crowd.

The Pope leans towards Mr. Ignatieff and said, "Do you know that with one little wave of my hand I can make every person in this crowd go wild with joy? This joy will not be a momentary display, but will go deep into their hearts and they'll forever speak of this day and rejoice!"

Ignatieff replied, "I seriously doubt that! With one little wave of your hand....Show me!"

So the Pope backhanded him and knocked him off the stage!

AND THE CROWD ROARED & CHEERED WILDLY!
Posted by MariaS at 13:49