because I am struck dumb. 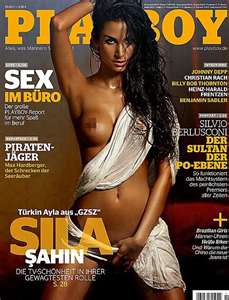 A MUSLIM actress has caused a storm by posing naked for Playboy.

Sila Sahin has been branded a "whore" and a "western slut" after appearing topless on the cover of the German edition of the men's magazine.

Sila, raised in Germany by conservative Turkish parents, says she fears being "spat at" and "shamed".

Her parents are said to have reacted with "horror" at the 12-page coverage, and her mother has apparently cut off all contact.

Sila, 25 - star of German soap Good Times, Bad Times - claimed the shoot was a reaction to the "slavery" of her youth.

She added: "What I want to say with these photos is, 'Girls, we don't have to live according to the rules imposed upon us'.