From my Lists of Things I didn't know before now.... about Toronto 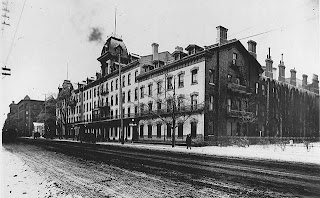 For over a century-and-a-half, the northeast corner of Front and York Streets has offered tourists and dignitaries a place to lay their head. Its central location and easy access to a major transportation hub made the intersection an ideal spot for a hotel ever since the first passenger train pulled out of a nearby platform in 1853. The Fairmont Royal York carries on a tradition of hospitality with a regal moniker from its predecessor, the Queen's Hotel. 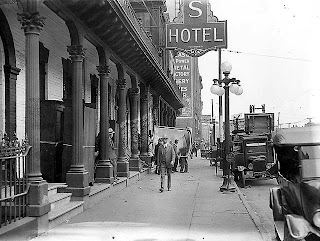 The first elements of the hotel were built in 1844 as four row houses designed by John Howard, who later bequeathed High Park to the city. After a decade housing Knox College, the homes were combined and opened for business as Sword's Hotel in August 1856. Most of the early clientele were government officials—when the colonial capital was moved to Quebec City the following year, operator Patrick Sword followed. A decade of expansions and name changes followed, with the name "Queen's Hotel" permanently assumed in 1862.


By the end of the 19th century, the hotel had gained a reputation as one of the city's most fashionable spots. Its location near the various incarnations of Union Station brought in tourists, businessmen, and politicians. Among those whose names graced the hotel's register were the Prince of Wales (King Edward VII), Sir John A. Macdonald, and Civil War figures Jefferson Davis and William Tecumseh Sherman. The Queen's offered over 210 rooms, 17 private parlours, a fine restaurant, and private gardens. 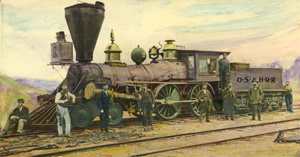 By 1927, as the current incarnation of Union Station neared completion, the Canadian Pacific Railway scouted the neighbourhood for a site suitable to build a grand hotel. The Queen's Hotel's location made it an ideal acquisition, one the CPR made that February for just over $1 million. The new owners announced that the Queen's would remain in business until the end of the Canadian National Exhibition in September. ................
Posted by MariaS at 14:38