The Canadian election news .... the election that only the three stooges want because ....

they have some sort of a deadly bug in their butts. On May 2, voters are going to be generous enough to give them a powerful laxative to get rid of that malicious bug.... rumors are afloat that the bug is some new kind of species called "coalition" or something and has traces of the same kind of DNA that was found in the bug extracted from the 3 stooges a few years ago.

A coalition of utter losers and big time liars.
The Liberals are lying through their teeth as usual. Yesterday, I read a great comment from a Robert Jacques to an article at CBC that was linked by Blazing Cat Fur.
quote:   (with emphasis and highlights by yours truly)

The Top Ten Liberal Red Book Broken Promises
1. Jobs, Jobs, Jobs Red book, Chapter 1 Canada currently has 1.4 million unemployed, half a million not looking for work, youth unemployment at 18%, and one in every four Canadians worried about their jobs.
2. Preserving and Protecting Universal Medicare By 1998/99 the Liberals will have cut $7 billion in social transfers to the provinces.
3. Scrap, Kill, and Abolish the GST Prime Minister Chretien and Deputy Prime Minister Sheila Copps on the campaign trail made this promise. The Liberals will have spent $931 million to bury the hated tax in Atlantic Canada.
4. Restore faith in Government Red Book, p.92 Sheila Copps, David Collenette, Jean Boyle, Michael Dupuy - 'nuff said.
5. Stable Multiyear Funding for the CBC Red Book, p.89 The Liberals cut $377 million from the CBC - a third of the public broadcaster's budget.
6. Renegotiate NAFTA Red Book p.24 Two months after taking power, Chretien signed NAFTA without any changes.
7. A Code of Conduct for Politicians Red Book, p.95 no new code and the Prime Minister uses the secret Ministerial guidelines only when convenient.
8. Appointments Based on Competence Red Book p.92 The Governor General, the Ambassadors to Isreal and Britain, the Chairman of Canada Post, and the last 19 Senators are all partisan Liberal patronage appointments.
9. More Free Votes Red Book p.92 out of more than 200 government bills in three years, the Prime minister has allowed one free vote on government legislation. The Liberal government has restricted debate on more than 20 occasions.
10. Eliminate Trade Barriers Red Book p.22
unquote

And, the above is only part of what's wrong with the Liberal party of Canada.  Party of Liars and crooks extraordinaire. 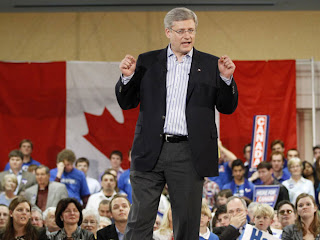 Harper says a majority would mean the Conservatives would govern the same way  as they have with a minority. I don't know if that is what we expect or what to make of it !!   But... hey .... the truth is ... they are the only party worth voting for in Canada.
h/t:  BH for pic of losers
Posted by MariaS at 13:59