From in and around the net

1) The Telegraph's intrepid reporter Andrew Gilligan has ferreted out where the vast sums of aid money ultimately wind up.

2) The Nazi-like organizations of Human Rights in both Canada and the UK keep making waves... the stinky type. Of all the shocking cases that have made a mockery of the Human Rights Act – which places the rights of criminals above those of their victims – few are as awful as that of Mohammed Ibrahim, a failed asylum seeker with a long criminal record who killed Amy Houston, a 12-year-old girl, in a hit and run accident, and who has won an appeal against deportation. Paul Houston, the dead girl's father, was promised by our Prime Minister last January that the Human Rights Act would be scrapped to prevent abuses such as this. However, part of the deal with the Lib Dems means that Dave cannot deliver on his promise. Those who imagine that the Lib Dems are a serious party should have this dreadful case waved in their faces as one of the consequences of their idiotic policy. 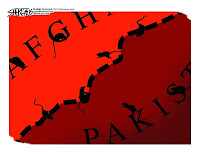 3) Pakistan is a malignant tumor that needs to be nuked like yesterday. The Central Intelligence Agency’s top clandestine officer in Islamabad was pulled from the country on Thursday amid an escalating war of recriminations between American and Pakistani spies, with some American officials convinced that the officer’s cover was deliberately blown by Pakistan’s military intelligence agency.

4) It has come to this in the era of a moslem appeasement prez of the USA. DOJ sues a Chicago school for denying a Muslim middle school female teacher three weeks of unpaid leave to abandon her students and make a pilgrimage to Mecca. You simply cannot make up this stuff.... it's happening, it's real.

5) Mark Gould, a private American citizen posing as a neo-Nazi sympathizer, spent the last four years undercover in Germany, investigating an unprosecuted Holocaust figure – allegedly the senior Nazi officer who signed the “start order” that commenced the genocide of Europe’s Jewish population. The following is footage from hundreds of hours of interviews with the now 97-year-old SS Colonel, who confirms that, on July 28, 1941, he personally signed the order allowing the first mass execution of Jews in the Pripjet Swamps near the Polish and Belarussian/Ukrainian borders. This effectively served as the flashpoint of the Holocaust.

6) Prosecutors charge that Yasrebi sought the approval and financial support for the founding of the charity from members of Hezbollah, as well as Iranian diplomats, ayatollahs and other representatives of the Iranian government. The more educated they are, the more elaborate their schemes to defraud the govt and funnel monies to places they shouldn't.

7) The mighty Obamas not invited to the royal wedding? Mark my words, long before the wedding date, the Obamas will be planning to be there.... heck, the invitation must have already reached the WH by now.... we all know by now how cowed down into political correctness the royals have plunged into ... willingly.

8) Nutty crimes committed at Christmastime. Yup... Christmastime brings out  the haters and the nuttiest of individuals. From stealing baby Jesus from a crib to stabbing Frosty.... you name it, it will have been done by a nut somewhere somehow to prove how much they hate Christianity.  They don't know that: