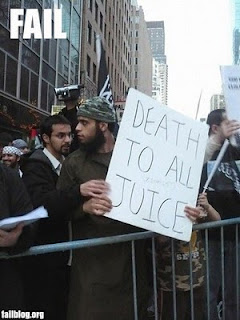 For 30+ years the muslim extremists have been unrelenting in their endeavors to get the great Satan and the "Juice" but according to the New York Times, because of the uproar over the GZ mosque the "anti-Muslim sentiment that has saturated the airwaves and blogs in the debate over plans for an Islamic center near ground zero in Lower Manhattan is playing into the hands of extremists by bolstering their claims that the United States is hostile to Islam." 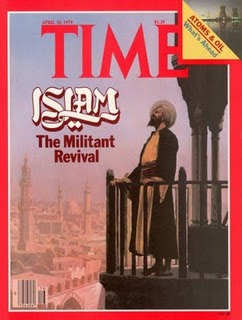 The New York Times further wants their supposedly senile readers who believe every word they publish that it is not the NY Times that opines this, but "Some counterterrorism experts say"  so.

The New York Times is just as truthful as our Toronto Star and most of our MSM.  This paper was once a giant.... see how it's fallen and fallen far....far.... far down below. What a cowardly publication!!! They are afraid of islamists and the tricks that islamists use to keep cowards like them in line. Appeasement is a form of cowardice, but the New York Times thinks of it as probably "social justice".

See the pic of the Time mag titled "Islam...The Militant Revival" ?  Wanna guess when that issue was published?  1979
Militant islam has always been about killing the infidels, that's you and me.  The only difference between the militant islam of 30 years ago and now, is this:  The Leftish parties  are betraying their countries and joining forces with militant islam thus empowering  the evil ones to heights not seen heretofore.
Posted by MariaS at 12:48