Karzai is what's wrong with Afghanistan .... 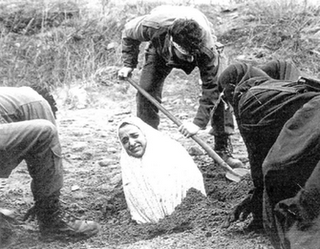 and why it is taking this long to bring full democracy to that country. The single biggest error that the USA and NATO has made is to keep Karzai in command. He has now become addicted to power and will sign anything with the devilish clerics and the Taliban to remain in power. The clerics are clamoring  to bring in "strict" islamist laws,  which translates to all the tenets of sharia law, which to you and I,  would mean stoning, flogging, hanging, amputation and what have you of anybody, even children for the most minor of offences. link and pics via:   Women Against Shariah
Afghanistan's largest gathering of clerics, who met to discuss reconciliation with the Taliban, has called for the revival of strict Islamic law as the country seeks ways to win militants away from a growing insurgency. 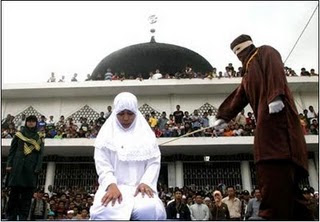 About 350 of the Islamic clerics, or ulema, met for three days this week, the meeting ending with a declaration calling on President Hamid Karzai to enact sharia, or Islamic law, including punishments such as stonings, lashing, amputation and execution.

"The lack of implementation of sharia hodud (punishment) has cast a negative impact on the peace process," said a 10-point resolution issued after the meeting.

"We the ulema and preachers of Afghanistan ... earnestly ask the government not to spare any efforts in the implementation of sharia hodud."........
Posted by MariaS at 12:23