How deceivers can get devilishly devious 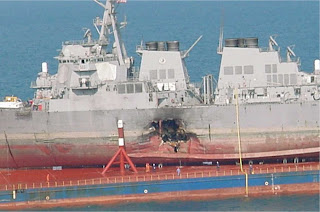 The appalling aspect of this story is that, this is not the first time and it won't be the last that Obama and his admin will commit such brutal acts. Nobody gives a damn about the victims' families... politics is a dirty game, we all know that. However, in the case of the USS Cole bombing on Oct 12, 2000, where 17 innocents lost their lives, WH under Obama has taken the corruption and the dirtiness to a height never seen before and I doubt we will ever see again in our lifetimes.... at least I hope not.

It’s a sleepy Friday in late August, the president is on another vacation, Congress is out of town, no one is paying much attention. What better time for the Obama administration to pull the plug, once again, on military commissions? This time, it has halted the case of top al-Qaeda operative Abd al-Rahim al-Nashiri, who was to be prosecuted by a military court for the Cole bombing. The Washington Post report is here, and Jen Rubin has thoughts at Contentions......

Maybe the al-Qaeda murderer ratted on some other rats within his organization and the ratty Obama admin. is keeping their promise of letting him off lightly for his help. When will Westerners learn that taqiyya plays a big role in whatever the rats tell you. Nothing he divulges will be worth the anguish of the victims' families..... nothing.

Here's a good link that gives the entire story of the USS Cole bombing and the aftermath.

Somehow, I don't find it very surprising that the muslim-loving govt of the USA is once again playing nice-nice with terrorists....do you ?
Posted by MariaS at 18:14