No woman, whether she is Muslim or not,  wants to take a beating from her spouse,  whether the beating is light or not. .

To be fair,  I think Naqvi probably didn't know the full contents of the book but unfortunately as the book's author was a Muslim, Mr.Naqvi should have had the sense to make sure that there were no sections within the book that talked about the insane doings inside the cult of islam which are considered to be normal by the members of the cult.

This man is not fit to be holding a government portfolio.  No which way!  He has to resign and resign pronto. 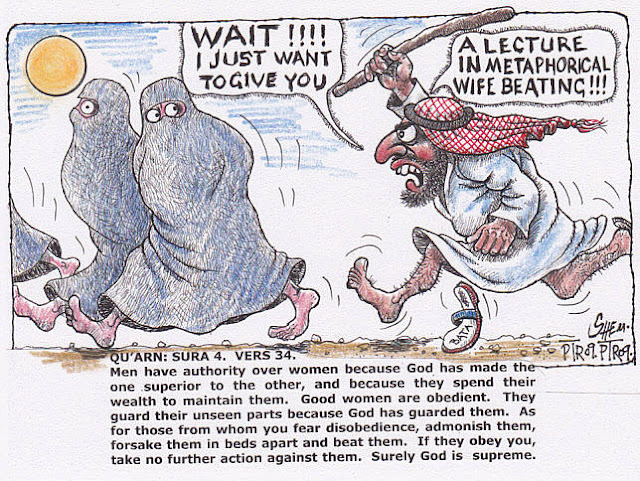 Matthew Coutts writing at YahooNews:    (read it for the comments from Canadians)
.... Liberal MPP Yasir Naqvi wrote a letter of support published in a book about Islam that condones men lightly beating their wives.
The book is titled Islam: Balancing Life and Beyond, and includes a chapter entitled "Does Islam Allow Wife Beating?"...

Shawn Jeffords writing at TorontoSun:
....A letter of support from Ontario’s labour minister appears in the latest edition of a book on Islam which condones men physically punishing their wives.

The letter from Yasir Naqvi appears in the reviews section of Islam: Balancing Life and Beyond. The book says it is within the tenets of Islam to “lightly” strike your spouse if she exhibits “serious moral misconduct.”

Naqvi congratulates the author, Suhail Kapoor, on the release of the new edition.

“I admire your drive to reach out to the public and promote values of tolerance, understanding and respect,” Naqvi said in the letter.

Kapoor told the Toronto Sun he wrote Naqvi asking for a review of his book. When he received a response to his request more than two years ago, he asked permission to reprint it and says it was granted by the Ottawa-Centre MPP’s office.

But the Liberal MPP said Monday he hasn’t read the book and didn’t authorize use of his response.....