Buzz going around at the Vatican


Will Canada  and France and by extension the Christians in the ex-French colony of Lebanon and other French colonies... will we all celebrate together  some glad tidings or will our hopes go up in smoke ?  (pun intended ... just in case you missed it.)

Sandro Contenta writing at TheStarToronto:
....Preach and they will come,  although many will not be worshippers.
That was the fate of Canadian Cardinal Marc Ouellet Sunday when journalists flocked to see him celebrate mass in likely his last public appearance before Tuesday’s conclave to elect a new pope.
With buzz about Ouellet’s chances of becoming pope still high, about 70 journalists from around the world descended on a church near the Vatican, much to the surprise — and some grief — of an equal number of Catholic faithful. 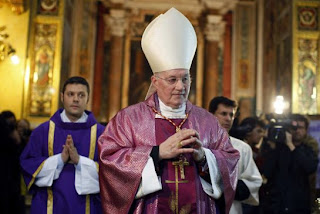 “Journalists are not very discreet, to be honest,” said worshipper Pascal Guelfo, 35, referring to the constant chatter and movement during the mass. “They didn’t show much respect for the Eucharist. You have invaded a little too much.”
Ouellet began his sermon with an explanation.
“We are all waiting for the next conclave — not only the faithful of the Catholic Church but the whole world awaits this great event,” The Quebec-born Ouellet said in fluent Italian.
The February resignation of Pope Benedict XVI — the first pope to quit in 600 years — has created “a rather unique time in the history of the church,” Ouellet added. In apparent response to Catholics who believe popes should die in office, he said 85-year-old Benedict had “thought at length” about his decision.
“We’re all trying to better understand the will of God on His church,” Ouellet said. “I can’t doubt that (Benedict) did it according to the will of God and for the good of the church.”
After the mass, it wasn’t difficult to find worshippers who described Benedict’s radical move as calculated shock-treatment for a Vatican mired in infighting and plagued by scandal.
“I worked there for years,” said Adamo Rossi, 72. “Believe me, I came to know a few things.”
“I found him simpatico,” he said of Ouellet, 68. “We need younger people like him or we’re not going to resolved anything.” The cardinal, Rossi added, seems to have the backbone and political smarts to whip an unruly Vatican bureaucracy into shape.
Parishioner Santo Strati, a freelance writer who has seen Ouellet preach several times, described him as “a great papal candidate.
“He’s younger than a lot of others, he’s well cultured and has good experience all around,” added Strati, 62. “The church needs someone who can spark the interest even of non-Catholics. There’s a great loss of faith that increases every day.”
All cardinals celebrated mass Sunday at the church they’re officially attached to in Rome. Ouellet’s is Santa Maria in Traspontina. He celebrated evening mass as pouring rain outside turned streets and sidewalks into rushing streams.....