Kids!!!   They are the same the world over, even if some of them are heading  their country.  Someone please shove a pacifier in Kim Jong Un's mouth ! 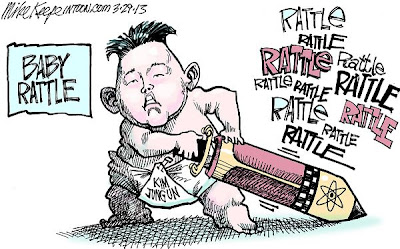 Calum MacLeod writing at USSToday:
Lashing out at America's "reckless provocations," North Korean dictator Kim Jong Un readied his rocket forces Friday to "to settle accounts with the U.S." a day after U.S. massive B-2 bombers roared into the area for a bombing drill with U.S. ally South Korea.

Kim ordered the country's strategic rocket units placed on standby to hit the U.S. mainland and U.S. military bases in the latest response by Pyongyang to the imposition of new international sanctions over it for its third nuclear test. The test was a violation of international agreements signed by the North.....