Apparently, the UK's in an uproar over horse meat but Muslim import is delicious.  Over here, some Canadians (you can count them on the fingers of your one hand) think horse meat should not be eaten.  So, fine ...you don't eat it...but stop making an ass of yourself over it.

..Protesters gathered in front of a Toronto French bistro on Monday, urging the owners to take horse meat off the menu.
Holding signs with pictures of their favourite horses, about a dozen protesters gathered outside LaPalette, located at 492 Queen St. W.
“Horses are pets, they are not livestock, they are not to be raised for food,” said Sherry Lounsbury.....

The pic below is showing horse burgers on sale in Borough Market, London.  Someone is  trying to show that there is too much fuss being made about  the horse meat  scandal going on there. 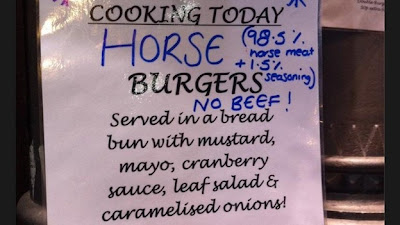 I will be visiting places in  Europe next month where they think nothing of eating horse meat.  Will try some myself...this time knowingly.  If  I am not mistaken, I believe  one of the Popes decreed many centuries ago, that  Catholics should not eat horse meat because he considered horses equal to armed soldiers in battle and thought that horses too had to be given a decent burial.