There are things that the Left in Canada keep doing that defies belief, and even your wildest imagination...  when you are sometimes generously inclined to give a few moments to wonder what  next the looniest of loons on the Left are  gonna do to cement your belief in how depraved and completely stupid these people have become.  The sorry story below is an example of how the fucking cranks at the Toronto District School Board (TDSB)  who happen to be in  positions of authority can make the Toronto Police Services go on a wild goose chase chasing after Canada's favorite blogger, Arnie Lemaire of Blazing Cat Fur, because he wished, in one of his blog posts,  that the TDSB  "be purged and burned to the ground."

Now,  if only wishes were horses then beggars would ride ...but the idiots who are in charge of our kids don't know such things.  If wishes worked, I would blissfully wish every waking hour that all lefties in Canada go galloping blindly off the highest cliffs and their bodies crash with loud sickening thuds on some rocks many miles below. 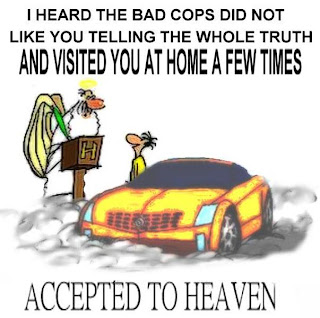 Do you see what's happening in Canada?  This is so very Orwellian that it's getting to be extremely scary.  We are being held responsible for our wishes and thoughts?   What next?  Will the Toronto Police Services (TPS) come knocking on our doors because we sneezed a little too loud and the next door neighbours heard it?  Or will our farts be so loud and thunderous and the the whiffs  waft out of our doorways and windows and alarm  the passers-by who will call the TPS and the TPS will come with sirens blaring to catch us before we let off another stinko???   What??  What??

Don't forget that Arnie Lemaire was the guy who broke the story about the "mosqueteria" activities at the TDSB and for that reason, if not for all the other mountainous piles of dirty laundry  he has been exposing about the failed education system in our province that the vilest of the Left  who are in charge of our school system in Ontario, hate him to pieces.

Joe Warmington's article below at the TorontoSun (thank the good Lord for them because they both wrote and talked about the insanity going on at the TDSB) has comments that show criticism of the TDSB  as well as the action of the TPS going door-knocking at residences of good, honest citizens while giving a pass to drug dealers and other lowlife that they should be focusing on.

Before you scroll to the article,  read the couple of commentors opinions below:


Emperors_New_Clothes • 8 days ago −
The TDSB actually BELIEVED the language was about burning the TDSB - lol - just how would one do that, its not one building or one place, its clear they abused their relationship with the police here to complain - I think they should be more focused on guns, shootings, robberies in schools than critics.

This is the worst case of intimidation against free speech we have seen to date. The TDSB is unable to come to terms with its fascistic leftist tendencies and so now they are acting like a little Stalin and the police are no better if they are doing their bidding. The TDSB supports Islamist prayer zones, pushing out other students from the participating school and resulting in Muslim girls being discriminated against for being women. They hired a plagiarist director and did not carry out a proper credentials check. The TDSB has been shoving a gay and an over-sexualized agenda down the throats of children when they are not even being taught the 3Rs properly. There needs to be a clean sweep of the TDSB and of its staff of social engineers forcing an agenda on the public that only makes sense to them. They are running a huge debt and cannot manage our tax dollars properly. The police need to ask themselves some serious questions about why they are infringing on basic human rights of this individual. They also need to explain why they are investigating the free exchange of ideas when there are so many serious crimes that they ignore. Perhaps they have too much funding and too much time on their hands - perhaps they are over-staffed. The politicization of the police and the race-based policing that we see with regard to the native community also needs to be questioned in a more intensive fashion.

Can writing a sarcastic but clearly tame blog comment really land two cops at your doorstep?

It happened to Blazingcatfur blogger Arnie Lemaire Wednesday for musing "OISE and the TDSB need to be purged, or burnt to the ground whichever is more effective."
He's, quite rightfully, upset about it.
But, often critical of the Toronto District School Board and the Ontario Institute for Studies in Education, Lemaire said he will not back down from efforts to "intimidate" him.

"Dear TDSB, You Can't Silence Me," was a headline on the blazingcatfur.blogspot in response.

But, what they clearly can do, is bring in the police to investigate.
In what can be described as more TDSB theatre of the absurd, an obscure six-week-old blog comment resulted in police visiting his home like one might see back in the day of the Stasi in communist East Germany.

"We received a knock at our door a little after 8 a.m.," said Lemaire. "Two detectives from Toronto Police Services identified themselves and asked if they could come in to discuss a matter."

Enter Det.-Consts. Irene Liska and Sergiy Lobanets, from 32 Division.
They presented "a photocopy of my post about the TDSB teaching children that the Black Panthers were a harmless social justice organization link" and specifically the "OISE and the TDSB need to be purged, or burnt to the ground" stinger.
It was almost laughable. He thought everybody would understand it was meant figuratively and obviously not literally.

"It was nothing but a rhetorical flourish. It's the language of blogging," said Lemaire.

That police would be called in for this, might be as out of bounds as was when they arrested a father in another school board because his child drew a picture of a gun. Unlike in that incident, where a man was strip searched, Lemaire said, these officers were professional.

"That said, I have to wonder why a non-threat was reacted to with near hysteria by the TDSB and investigated while death threats to Tarek Fatah do not merit consideration by the TPS?" asked Lemaire. "To my mind this was simply an effort by the TDSB to intimidate me into silence and is plainly an abuse of power. It won't work, but I suppose I shouldn't be surprised that an organization that holds up psychopaths such as Che Guevara and the Black Panthers as role models for children would resort to such thuggery."

"The TDSB has long been a target of this blog, and evidently is not a favourite of the thin-skinned, politically correct twits who run that radical leftist cesspit," he wrote. "My efforts have been responsible for publicly embarrassing the TDSB on several occasions, starting with the Mosqueteria, their teaching that only whites are racist, their homage to Che Guevara and of course their advocacy of Veggie Sex for children. These posts have brought deserved public scorn upon the TDSB and their sting increased manifold when major media outlets picked up the stories."

The TDSB has removed the latest Black Panther link.
For that and all of the other victories, Lemaire believes, one phone call delivered some pay back.

Meanwhile, a photographer was recently overheard saying he was "heading over to city hall to shoot the mayor and his children."

In an office with intelligent people, no one seemed to feel a need to call police.

More at Blazing Cat Fur  giving all the nitty-gritty details.  It was good to see that Arnie Lemaire got strong support not only from SunNews but also from prominent bloggers and writers from Canada and also from the USA.  Mark Steyn being one of them.