Is Pope Francis a special kind of dhimmi or as conniving as the Muslim Bros ?

Is the dhimmi really a dhimmi or is he hoping for muslim conversions to Chritianity?  Does the fuck really think he will do away with hatred because he loves kissing feet of all shapes, color and creeds?     %$#@*&&^^%%$#(*&^ !!!! 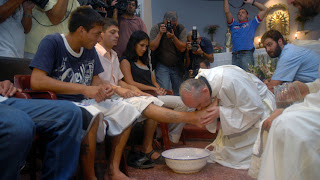 The caption to the pic says: Then Cardinal Jorge Mario Bergoglio of Argentina washes and kisses the feet of patients of the Hogar de Cristo shelter for drug users back in March 20, 2008. (Enrique Garcia Medina/Reuters)

From AP via CBC
...Pope Francis washed the feet of a dozen inmates at a juvenile detention centre in a Holy Thursday ritual that he celebrated for years as archbishop and is continuing now that he is pope. Two of the 12 were young women, a remarkable choice given that the rite re-enacts Jesus’ washing of the feet of his male disciples.

The Mass was held in the Casal del Marmo facility in Rome, where 46 young men and women currently are detained. Many of them are Gypsies or North African migrants, and the Vatican said the 12 selected for the rite weren’t necessarily Catholic.

Because the inmates were mostly minors — the facility houses inmates aged 14-21 — the Vatican and Italian Justice Ministry limited media access inside. But Vatican Radio carried the Mass live, and Francis told the detainees that Jesus washed the feet of his disciples on the eve of his crucifixion in a gesture of love and service.


The vid above is from the TelegraphUK and the writer there has gone out of her way to title the article Pope washes feet of young Muslim woman prisoner in unprecedented twist on Maundy Thursday although His Holiness kissed the feet of 11 other people.  There won't be an end to the telling and showing of this act.
Posted by MariaS at 11:59