The UN better get used to commonsense from Canada, we have loads of it to give away


Somebody has to tell the Useless Nitwits what's what.  Canada has elected herself to that role. YAY for us !  The UN is nothing but a stinking pot of bureaucrats. It is heavily influenced by the oil-rich Muslim countries, the EU and the USA.   Everybody knows it.  It's as plain as the nose on your face.  Furthermore, the UN is always too late in taking any concrete action.... case in point: Dafur.  When the UN was created, it was created with the intention of preventing wars and genocide not dictating where and how generous countries of the world are supposed to use their funding and what and how much food intake we should be taking. 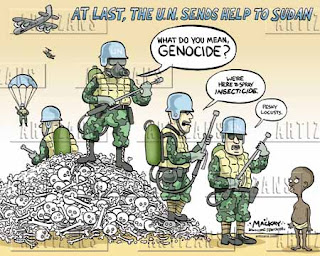 Canada will do well to spend the $350,000 (and even more) by directly allocating it to targeted areas of drought, if and when they occur....instead of using a "middlemen" like the UN to dictate where and when  the money would be best made use of.

....The United Nations has responded to Canada's withdrawal    from a UN convention that fights the spread of droughts, calling the pullout "regrettable."
Prime Minister Stephen Harper has said Canada was withdrawing from the United Nations Convention to Combat Desertification because the program has proven too bureaucratic.

He has said less than one-fifth of the $350,000 Canada contributes to the convention goes to programming, while Foreign Affairs Minister John Baird called the entire process a "talkfest'' that does a disservice to Canadian taxpayers. 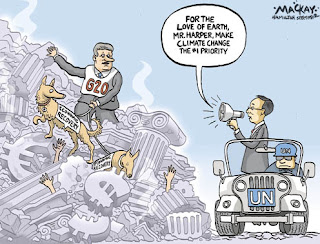 But in a press release issued on Friday, the convention secretariat based on Bonn, Germany, said the convention is the only legally binding instrument addressing desertification and drought and pointed out that Canada itself is "frequently subjected to drought."

The UN body also said the convention is "stronger that ever before" making Canada's decision to withdraw from it "all the more regrettable.".........