You Go Girl .... wallop them to kingdom come, crush them, bury them, nail them good !! 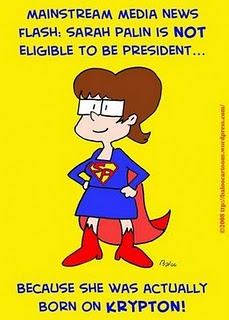 .....It’s tough to fittingly describe these numerous members of the mainstream media who actively engaged in the debate about this conspiracy back when I was first introduced as John McCain’s running mate, and it’s impossible to legitimize any “prominent” media publication that continues to traffic in this bizarre narrative today. It wasn’t just a few fringe characters in that JournoList discussion. It included writers for major newspapers, magazines, and online news publications. Those participating in this immature exchange in attempts to plant seeds of doubt and falsely accuse even included a famous historian......

And a Team Sarah member has more: ...The truth is coming out, and already it has shown the lamestream media as the obsessively partisan, corrupt, shameless hacks they are. But it's not over. In fact, this exposure may just be in its beginning stages. Fifteen pages of emails among Journolisters reveal that there are those within the group who were captivated by the insane.

here's more on the trashy riff raff journos   who cream their panties every time Obama smiles or frowns or whatever.
Posted by MariaS at 18:36