The Queerest case of the Dumbest Queers in Canada 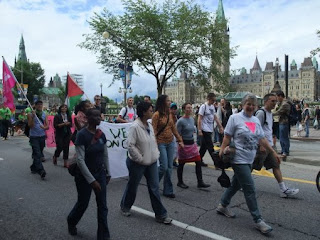 Without a sliver of a doubt, everybody knows that the group calling themselves Queers against Israeli Apartheid are the First Prize winners of  'Dumber than Cardboard"contest.  I hope I am not insulting any trees. You trees, before you were chopped down to make cabinets and cardboard and such, you were beautiful to look at, sprouted  many a lovely leaf and perhaps some edible fruit, gave shade to picnickers and an abode to squirrels and insects and bestowed  many other useful benefits to the environment around you.

Now let's compare just ONE tree's worth during it's lifetime to these POSs who contaminate the streets of Toronto during the Gay Pride Parade. Why do we even need to have such "added" depravity in our streets is a wonder to me, don't we have enough shootings and rapes and what not ... but I digress. This particular rant is to do with the Dumbest Queers aka QAIA and not the other ones, however misguided or not they happen to be, to willfully march in the depravity known as the Gay Pride Parade... which  the city's mayor and the city's police chief dutifully attend and march in, carrying tissue boxes to clean up the gays' .... you know what.

These dumbest of the dumb mammals who find themselves walking on two legs and not four, were so ecstatic that they were able to reverse the Pride Toronto organizers' decision letting them march carrying banners calling Israeli an apartheid state, that they boasted in writing with this statement:

“This is a victory for the Palestine solidarity movement, which has faced censorship and bullying tactics from the Israel lobby for far too long,” says Tim McCaskell, a member of Queers Against Israeli Apartheid. “The Israel lobby learned a tough lesson today about our community’s proud history of standing up to censorship and human rights abuses.”

And you know what else is hilarious? This will bring out an involuntary snort ... so mind your coffee lest you spill stuff on the keyboard.  Right at the top of their website they have a banner proclaiming: "We stand with Queers in Palestine "  This is as funny as Iamamadjacket saying "We don't have any homosexuals in Iran".

Now,  let's think for a tiny little nano second here. Do you think the gays in Gaza want to advertise that they are gay?  Maybe, in Fatah controlled West Bank the gays are not heavily persecuted.... but in Gaza?  At their website they have a logo  that, IMO, looks like a used condom with the colors of the Hamas flag... albeit the bright red of the terrorist flag is substituted with a glaring pink.  Is it so very difficult for these dumb f**ks to grasp that gays from Gaza, the West Bank and the other muslim regimes around Israel will do anything to become citizens of Israel.  In Israel, gays serve openly in the military and have the best of lives.  In the muslim regimes around Israel, when gays fall in the "wrong hands", their penises are cut off and fed to them while they are still alive.  When they fall in the "right hands".... which translates to the laws of the region... they are hanged from telephone poles and anything high and handy that can make the  gay bodies dance gayly until they are dead and all this to the beat of  "Allahu Akbar... Allahu Akbar"

I fully agree with Ken who commented here after the press were all very gleeful that the censorship against QAIA had been lifted.


"Censorship" my ass... if the Reverend Phelps wanted to march with a sign saying 'God Hates All Gays' do you really think the manipulators of QAIA would be supporting his "right to march"? Hahahahaha If I show up at Pride with a sign Homo Against Hamas War-Crimes do you really think I'll survive unscathed?Let's be honest. The people at QAIA just added the word Queer to their name as a ploy...there is NOTHING in their entire reason for existance that helps Queers anywhere...in fact quite the opposite. They are trying to de-legitimize the one State in the Middle East that supports Palestinian gays. Go figure!What is SURE is that they have skillfully manipulated the gay press and in so doing have made sure that the last two months have been all about THEM and THEIR agenda, while gay issues have almost completely disappeared. 350,000 Sudanese Muslims have been killed in the lasst few years by other Muslims, but QAIA think Israel needs condemning more? Hamas' Charter targets Jews all over the world for assassination, but the gay media remain silent on THAT little tidbit? Hyopcrisy is teh name of teh game. 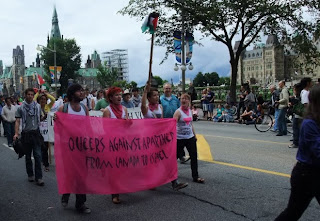 All the PR work that the gay community of Canada has been doing all these years that had enabled them to get this far, where, ironically only a handful of the far-right bigots and the Canadian muslims viewed them with distaste, has now gone down the drain. Even people like myself who "had" a soft corner for the gay community is now heavily disappointed and disillusioned with the entire concept of Gay Rights and the Gay Parade. Things were handed to the gay community on a golden plate, but now all they do is spit into it.


Kill the Gay Pride Parade. We don't need it. It's a sex show and nothing more.  Normal gays, who are not partiers and drug takers and other substance abusers,  never ever participate in this depraved show.  Shame on parents who take their kids to watch this depravity.  Don't  let your own suppressed desires for a taste of  depravity trickle down to your offspring.  Keep them away from this rubbish and set a good example by not attending it yourself.

Hotair had a long article on this shameful group which will be marching in the Toronto streets this weekend.   Photos are from the  QAIA website and supposedly while they were marching in Ottawa.