Toronto mayoral candidate Rob Ford being “set up” by slimeballs

and I suspect Sid Ryan’s Unionized thugs. The Unions know that Ford is no friend of the Unions and is not dependent on Union funds for his honest campaign so they go after him. They know that any one of the other candidates will be like putty in their hands but not Rob Ford, at least from what we have seen and heard about him, even after this "set up". 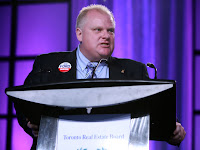 It now transpires that the dark forces went into a frenzy when they saw that Rob Ford was the forerunner in the polls carried out last week. They were expecting one of the others in the mayoral race to be the forerunner, and I will go out on a limb here and say with conviction that at least one or more of the others in the race are getting Union funds for their campaigns.

Rob Ford was on CP24 a little while ago and said that the man who called him up was “sounding distressed and disturbed” and the thing that actually disturbed Ford was when the man said “I can see your house”. Ford tried to calm the man down as best he could by promising him the drug that the man wanted, anything to calm him down.  Ford tried to get off the phone several times without provoking him but now we can clearly see that the man was put up to this to get incriminating “words” or “sentences” from Ford’s mouth and that he probably pretended to “sound desperate” while all the time taping the phone conversation and trying to keep Ford talking as long as possible. A couple of days later it was revealed that the man was again tweeting from just outside near Ford’s house when Ford was away from home and his family were alone. Real scary stuff for any family man who cares for their family.

Torontonians, don’t forget the terrible times we have gone through during the “garbage” strike. Something like that is bound to happen again, make no mistake about that, because we know that Union workers are never ever happy with the bucks they make. The next time it happens, we want someone like Rob Ford at the negotiating table and not someone like the other candidates who are most likely in bed with the Unions or prone to jump into them at the slightest invite.

Sue-Ann Levy who broke this story got the tape from the homosexual couple. Dieter Doneit-Henderson, the 30 year old gay married man and his "husband" were shopping around all the media outlets to sell their tape.  Are these two part of the gay parade that carry the banner "Gays against Israel"?    Hmmmmm .... I wonder... but I won't be surprised.    As far as I am concerned, this shameful state of affairs has Union fingerprints all over it.
There’s more here at CP24 including the press Ford gave this noon.
Posted by MariaS at 13:00