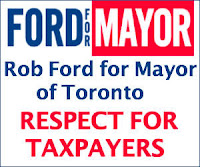 During the most recent CP24 debate, George Smitherman flat-out denied that he handed out $10 million in sole-sourced contracts to the Courtyard Group, where his former Chief of Staff was employed.
The facts tell a different story.


We have launched Bad Answer to get those facts out in public, because we believe the voters of Toronto have a right to know the truth about where the money went during the billion dollar E-Health scandal.

Not only will George Smitherman not release his donors' list (which every major Mayoral candidate since 2003 has done), but he has still not come clean on the Courtyard Group sole-sourced contracts.
Please forward this post or the link above to your family and friends in Toronto.  It does not matter whether they are leaning Right or Left, everybody needs to be fully informed before they cast their vote on Monday, October 25.

The link has the scandals of the Liberals in Ontario that have left a bad taste in the mouths of Torontonians. No amount of toothpaste, mouthwash or floss can get rid of that.

Here are some articles gleamed from Badanswer.ca

http://blazingcatfur.blogspot.com/2010/10/jewish-blogger-threatened-with-legal.html
Posted by MariaS at 16:59