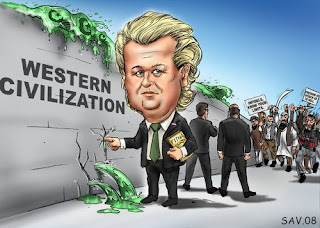 Geert Wilders, one of the most courageous men this part of the century will ever see, has an oncoming battle on behalf of humanity, decency, intregity, freedom of speech and thought and above all on behalf of those who still value European democracy... a democracy which is fast eroding due to Europe's foolhardiness and short-sightedness on moslem immigration policies.

The battle Wilders has own in the The Netherlands court is just that... a battle. The war is looming large and only courageous, outspoken men and women like Geert Wilders can hope to fend off the tide of islamization which has grown stronger since the advent of Obama. Obama's actions, non-actions, his muslim background and his stance on Israel has been like an infusion of energy drinks on which the moslem fundamentalists are getting themselves dangerously drunk on.  Increasingly, we are seeing that it is getting harder to retain our democractic freedom and to defeat the cavemen mentality that threatens to overwhelm our civilization.  Britian is almost taken over by sharia laws and that too while hardly anybody knew what was going on until it was too late.   Is the rest of Europe far behind and then after that, do you really think the islamic tide will not reach your shores?  If that's what you think .... dream on.

Below is a great analysis of the bizarre situation that the Dutch politician found himself in, and all because of his bravery in criticizing an ideology which is a cult of the very worst kind on God's good earth. You can call it a religion, I call it a cult.

Geert Wilders is the latest in a lengthening roster of Europeans who have been criminally prosecuted for criticizing Islam. Under the slogans of stopping “Islamophobia” and banning “defamation” or “insult” of Islam, for two decades a concerted demand has been made for the West to enforce Islamic blasphemy rules, as is customary in certain member states of the Organization of the Islamic Conference.

The Netherlands has been among the many EU states struggling to comply. In the name of liberalism, it has enacted laws criminalizing “hate speech,” with grossly illiberal results. A sample of the Dutch cases shows that the desire to protect minorities is a self-deluding piety in these circumstances. What really lies at the root of these vaguely defined and arbitrarily adjudicated cases is fear of Muslim violence.......

Below is what was written in Feb, 2010 when Nina Shea writing with Paul Marshall on Geert Wilders prosecution said:


... The danger has not been mass imprisonment — actual convictions have been few — but the creation of a general deterrent to criticism of Islam or anything Islamic. Europe’s leaders likely believe that banning religious hate speech is a small price to pay for greater security; if so, they are wrong. The premise that religion can be easily compartmentalized, relegated to an autonomous sphere separate from politics and culture, is a misconception. Europe’s present path has profound implications for scholarship, political progress, social and economic development, and national security. This chilling of speech, aggravated by Muslim violence, erodes fundamental freedoms of speech and religion and threatens the West’s very identity...