Rob Ford is making leftists tear their hair out .... if they have any remaining, that is

It's really fun to read all the stuff people say about Toronto's mayoral candidate. Some very unexpected people are now firmly in his camp.... my neighbours for one. Liberal to the core, at least I thought both the sisters were, until yours truly, inquisitive about evrything and fishing for opinions, asked one of them what they thought of Ford.  Said the sister... and this is a direct quote: "I was going to vote for the gay guy, but then I heard on the radio that Rob Ford does not want more refugees coming into Toronto... and I said to my sister "That's the guy we should vote for... he's a straight talker."  This goes to prove how completely fed-up people have become with the politically correct lying politicians, whether from the Left or the Right. 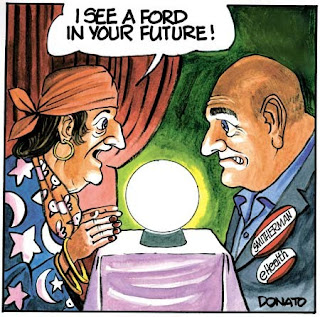 Lorrie Goldstein's piece in the Toronto Sun touches on how the lefties have been trying to smear Ford but all their gooey stuff is just falling off like water on a duck's back. And, from the comments to the article, it is crystal clear that people want to send the Lying Liberals packing in a pack. Dalton McGuinty...... where are youuuuuuuuu?   Your turn next Mr.Nanny !!
To be fair, Rob Ford hasn’t yet been accused by his political, media and other opponents of being the anti-Christ, or the second gunman on the grassy knoll who assassinated John F. Kennedy..............

For Toronto voters who would like to vote in advance, here are the dates and locations:
http://www.toronto.ca/elections/terms.htm
Posted by MariaS at 20:36