Israel... You Are Not Alone 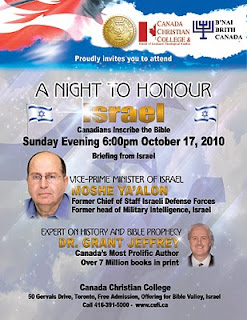 Yesterday, I attended the "A Night to Honor Israel" event held at the Christian College in Toronto.  The Vice-Prime Minister of Israel, Moshe Ya'alon was present and gave a long speech in which he profusely thanked PM Stephen Harper and the Conservative Govt for their support of Israel.  What stunned me the most was when he said that this open support from a Canadian Prime Minister and his govt has been received only after 50 years. "50 years"?  Did I hear right?  I hope I didn't.

How shameful that Canada, before the present Conservative Govt came to power, did not support the only democracy in that part of the world, a democracy that is threatened by the surrounding  marauding cavemen. How deeply brainwashed have Canadians become under long stretches of the Lib govt?  Hard to believe that Canadians cannot see straight.

The rally yesterday was held to show all Canadians that Christians and people of the Jewish faith stand shoulder to shoulder and will always do so. Some would like to put out some false rumours that it's only a small minority of Christians, the hard-right Christians only, who are with the Jewish people as they wait anxiously for the "rapture" days in which, according to Bible prophecies, Israel plays a big role. That is definitely not so and it was apparent at the rally yesterday. Those who attended, and if I am not mistaken there were over a 1000 people there, people of all races, colors and creeds, showed their deep support for Israel in no uncertain way. 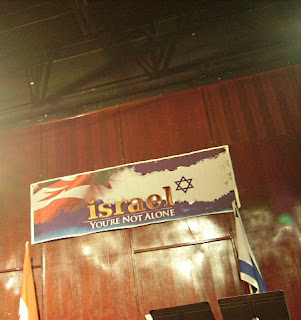 There were countless pastors from all over Toronto, pastors who prayed fervently in the language of their choice and comfort, prayed for Israel and for the leaders of both Israel and Canada. Pastors from The Philippines, from Korea, from India, from The Carribean... you name the country and you would find a pastor representing  the Canadians whose roots go back to those lands.   Also, a very energetic Rabbi gave an excellent speech, unfortunately I didn't catch his name.

From the Israeli Vice-Prime Minister's speech, the take away thought I had was that Israel is feeling very alone at a time when the forces of evil are gathering all around his country with the most evil of intentions. I hope that Israel will stick with their motto of "Never Again" even in the face of international condemnation and do what is best for themselves and damn the consequences. No matter what Israel  will do or not, Israel brings out that unreasonable eons-old hatred that has no name, that no-name intense hatred that springs from the Left and the moslems alike.

Another speaker at the event was Dr.Grant Jeffrey, the author of several books and articles on Bible prophecies. I have to disclose here that I am no believer in prophecies and I take my belief in Christianity only from certain parts of the New Testment and mix it all with a large dose of science to make it palatable.... so I am no fan of Dr.Jeffrey and his never-ending prophecies and stuff.... however, Dr.Jeffrey's speech was riveting and had the following titbits:

- Obama's first name "Barack" is actually "Mubarak" like the Egyptian Prime Minister's name;
- The Stuxnet virus has crept into more than a million  computers in Iran;
- The world's best hackers find a place with Israeli intelligence;
- Iran has been executing their own scientists suspecting them of working with Israelis in spreading Stuxnet;
- Russian scientists and diplomats are making frequent trips to and from Iran;
- Russian computers are also beeing "stuxnetted"
- The Iranian underground resistence movement is still raging, this time outside the streets and  beyond the realms of ordinary internet communications;
- Something called "Dark Net" is what the Iranian dissidents use so nobody knows who's talking to whom besides the parties concerned. This same medium is also used by terrorists and scum and is heavily patrolled by the CIA and such;
- Egypt and Saudi Arabia have shown their willingness to granting access to Israeli aircraft, submarines or warships if and when the time comes to nuke the nuke sites in Iran. Iran is also a threat to these two countries.
- Obama refused to help Israel with their request for flying their jets over Iraq and that's when they approached Egypt and Saudi Arabia.

I would have liked to post a link to the Israeli VPM's speech, but at this point in time I cannot find it anywhere on the net. If someone does, please post the link in the comments.
Posted by MariaS at 15:20