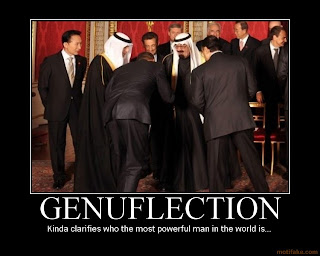 Dr.Watson: Holmes, do you think slavery is condoned and approved by Obama and  gang otherwise why would  Obama bow and genuflect before the leader of a slave-owning country?
Sherlock Holmes: Yes, absolutely!  That's called LOGIC, my dear Watson, logic!  Well done !!


Michelle Malkin writing at her blog:
....Slavery in America, Saudi-style. Yes, there’s a war on women in America. But it’s not the phony “war” that tampon-hurling feminists are always shrieking about — as they did last week in Texas to protest tougher regulations on dangerous late-term abortion clinics. No, I’m talking about a real war on women waged by Saudi royals and elites who’ve imported human trafficking and abuse of domestic workers onto U.S. soil.

Meet Meshael Alayban of Saudi Arabia, wife of Abdulrahman bin Nasser bin Abdulaziz al-Saud. She apparently thought we Americans would look the other way at human trafficking and abuse of domestic workers — you know, the way they do in her misogyny-infested home country. The wealthy Meshael Alayban thought wrong.

Last week, Orange County, Calif., prosecutors charged Alayban (who lists her occupation as “princess” on her tourist visa) with felony human trafficking. Enslavement. A Kenyan maid escaped from Alayban’s compound earlier this month after allegedly being held against her will. She told police Alayban confiscated her passport, refused to abide by an employment contract and forbade the worker from returning to her home country — where she has an ailing 7-year-old daughter.

When law enforcement officials entered Alayban’s mansion, they found four other domestic workers from the Philippines who also have indicated a desire to be freed from Saudi bondage. The servants tended to the round-the-clock needs and whims of the princess, her husband, their three young children, a grandmother and three other extended family members. Last week, Alayban posted $5 million bail (paid for by the Saudi consulate) and was whisked back to her estate by a phalanx of bodyguards. She must wear a GPS tracking device and will be arraigned at the end of the month. Her high-priced lawyers dismiss the incident as an insignificant “wage dispute.”

Orange County District Attorney Tony Rackauckas minced no words: “It’s been 150 years since the Emancipation Proclamation, and slavery has been unlawful in the United States, and certainly in California, all this time, and it’s disappointing to see it in use here.” Fortunately for the alleged victim, California has an anti-human trafficking law put in place by voters through a state initiative last year. Alayban may enjoy countless royal privileges back in Saudi Arabia, but here she’ll have to face the legal music.

The same cannot be said for the alleged abuser(s) of two Filipino women who escaped a Saudi diplomatic compound in Virginia earlier this year. At the end of April, the women broke free and were taken into protective custody by Department of Homeland Security personnel. The gated complex is owned by the Kingdom of Saudi Arabia’s Armed Forces Office, whose personnel reportedly enjoy full diplomatic immunity. What exactly happened, who is responsible, and what are the consequences? The Department of Homeland Security has not responded to my follow-up inquiries about the case............