HAHAHAHAHA!! Warmongers getting their panties in a twist on Syrian issue ... 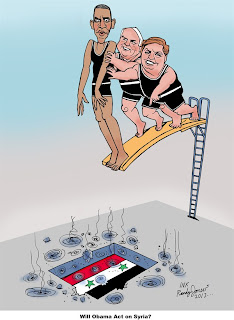 ... Disillusioned by the Islamist twist  that the "revolution" in Syria has taken, exhausted after more than two years of conflict and feeling that they are losing, growing numbers of rebels are signing up to a negotiated amnesty offered by the Assad regime.

At the same time, the families of retreating fighters have begun quietly moving back to government-controlled territory, seen as a safer place to live as the regime continues its intense military push against rebel-held areas.
The move is a sign of the growing confidence of the regime, which has established a so-called "ministry of reconciliation" with the task of easing the way for former opponents to return to the government side. 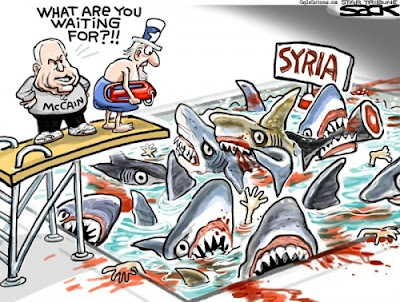 Ali Haider, the minister in charge, said: "Our message is, 'if you really want to defend the Syrian people, put down your weapons and come and defend Syria in the right way, through dialogue'."
Mr Haider, who has a reputation as a moderate within the regime, has established a system in which opposition fighters give up their weapons in exchange for safe passage to government-held areas........

From the Telegraph:
...As President Assad looks increasingly confident,   Britain, France and the US look weak.  t was a only a few weeks ago, at the G8 summit in Northern Ireland, that David Cameron was demanding the removal of Syria’s president, Bashar al-Assad, claiming that he had “blood on his hands” and that it was “unthinkable” that he could play any part in Syria’s future. Yet it now seems increasingly likely that, far from being forced from office, President Assad will retain control of much of the country. Certainly the recent successes recorded by pro-Assad forces appear to have had a disastrous impact on the morale of rebel fighters, with hundreds deciding to take advantage of an amnesty offered by Damascus to surrender their weapons and give up the fight. 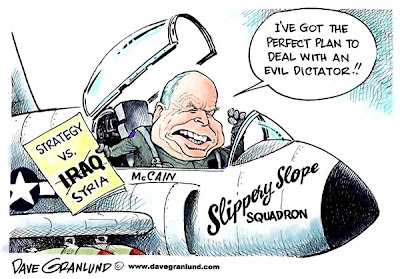 This remarkable turnaround is in part due to the unstinting backing Damascus has received from its allies, Russia and Iran, both in terms of military support and diplomatic cover – especially Moscow’s refusal to sanction any UN resolution authorising intervention. The rebels’ cause, meanwhile, has been undermined by constant infighting and attempts by Islamist militants to hijack the opposition agenda; the presence of fighters with links to al-Qaeda has been one of the main reasons why those who wanted to arm the rebels have grown more cautious.

Faced with the awful complexities of the Syrian insurrection, the West collectively decided that the costs of intervention were too high. That may well have been the right decision. But inaction has its costs, too. With President Assad and his backers in Moscow and Tehran looking increasingly confident, those powers that demanded his overthrow – such as Britain, France and the US – look impotent and weak. Rather than convening international conferences to consider Syria’s future, they must now start thinking about how to deal with a regime clinging tenaciously to power.....