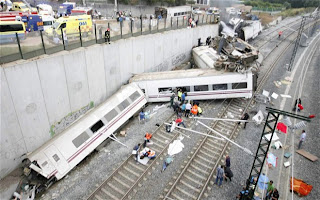 Fiona Govan writing at TelegraphUK:
....At least a thirty-five people have been killed and more than 50 injured after a passenger train derailed outside the northern Spanish city of Santiago de Compostela.

All 13 train carriages carrying 218 passengers plus crew left the tracks and four carriages overturned completely. Images from the scene showed crumpled metal and smoke billowing from the wreckage.
The train derailed shortly before 9pm local time as it sped along a curve in the tracks approaching the cathedral city of Santiago de Compostela, in Spain’s northwestern region of Galicia.

It was not immediately clear what had caused the crash but some passengers reported hearing an explosion before the train derailed. Spain’s Interior Ministry, however, quickly dismissed a terrorist attack as the cause of the derailment.

“It was going so quickly it seems that on a curve the train started to twist and the wagons piled up one on top of the other,” Ricardo Montesco, a passenger on the train, told Cadena Ser radio.
Authorities could not immediately determine many people had been killed in the accident but last night Alberto Nunez Feijoo, the President of the Galician region, said that thirty-five bodies had already been pulled from the wreckage.......
Posted by MariaS at 18:49