The pyramids of Sudan


If the Wahhabis and Salafis and the  Muslim Bros  destroy the Egyptian pyramids, as they dream of doing just like the other Muslim madcaps did to the giant Buddhas in Afghanistan .... we will still see traces of the greatness of what once was Egypt in the pyramids of  the Sudan. 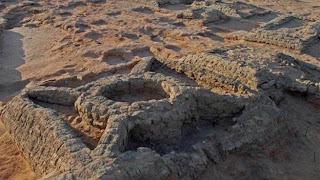 
At least 35 small pyramids, along with graves, have been discovered    clustered closely together at a site called Sedeinga in Sudan.
Discovered between 2009 and 2012, researchers are surprised at how densely the pyramids are concentrated. In one field season alone, in 2011, the research team discovered 13 pyramids packed into roughly 5,381 square feet (500 square meters), or slightly larger than an NBA basketball court.


They date back around 2,000 years to a time when a kingdom named Kush flourished in Sudan. Kush shared a border with Egypt and, later on, the Roman Empire. The desire of the kingdom's people to build pyramids was apparently influenced by Egyptian funerary architecture.
At Sedeinga, researchers say, pyramid building continued for centuries. "The density of the pyramids is huge," said researcher Vincent Francigny, a research associate with the American Museum of Natural History in New York, in an interview with LiveScience. "Because it lasted for hundreds of years they built more, more, more pyramids and after centuries they started to fill all the spaces that were still available in the necropolis."........