Marco Rubio: "God has a funny way of reminding us we are human"


Matt Drudge has become USA's  #1 comedian. His page heading yesterday   "Watergate 2013" with pics of Obama and Hillary sipping water during speeches, with CNN's inane remark about whether Rubio's political career was over because of the sip ....  had me laughing aloud.

What is totally priceless however, is Rubio saying "God has a funny way of reminding us we are human"  to explain his need for water during his speech.

Daniel Halper writing at WeeklyStandard:
Rubio's PAC Sells Water Bottles  In response to the outrage over Marco Rubio's decision to drink water during his response to the State of the Union Address, his PAC, Reclaim America, has begun selling water bottles. 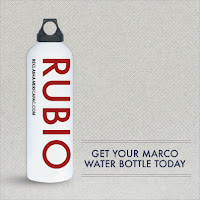 "If you had an opportunity to watch Marco's Response to the State of the Union last night, you were undoubtedly energized by his message of upward mobility, free enterprise and limited government," writes Rubio's PAC in an email.

"If you've watched the media coverage since, you might think that Marco spent the entire time gulping gallons of water.  The liberals and the pundits flocking to Twitter and blanketing MSNBC can't stop talking about what it means that Marco stopped and took a drink of water in the middle of his speech. Why would they be so focused on a man reaching for water instead of on what he said?  Because they know they can't effectively tear down his message. So they will try and distract from it. What he said was too conservative, too convincing and frankly too inspiring for some in the media and their liberal allies. So instead of attacking his message they attack the messenger.  We've seen it before but it won't work this time.

"But don't get angry at the liberals who want to bury what Marco said.  Laugh at them.  So in that spirit, we here at Reclaim America are launching the official line of Marco Rubio water bottles.

"Send the liberal detractors a message that not only does Marco Rubio inspire you... He hydrates you too."