Candidates for the Papacy


I am so torn.  It would be great to have Canadian Cardinal Marc Ouellet become the head of the Catholic Church and make both Canada and France proud.  It would also be great to have Cardinal Oswald Gracias of India become the Pope and thus get millions of converts from the billion+ population of India and it would be equally great to see Cardinal Patriarch Boutros al-Rahi of Lebanon sit on Saint Peter's throne and help to break up the Middle East into separate countries for Muslims and non-Muslims.  I also like Cardinal Peter Kodwo Appiah Turkson of Ghana, especially because he is not as old as the others and it would be a great new beginning for Africa ....and also because I tend not to give any credence to "prophecies". If  Cardinal Peter is appointed, he would be the 3rd or 4th black pope and not the first as most people seem to think.

It's gonna be interesting to see who is actually chosen to lead the Catholic Church after Pope Benedict XVI.

From ITVNews:
Speculation has been gathering over who will replace Pope Benedict XVI when he steps down on February 28, here is a quick look at the runners and riders.
French-Canadian Cardinal Marc Ouellet, 68, is a hockey fan and has been described as "affable as well as cosmopolitan" by the Ottawa Citizen.
Multilingual Ouellet has the same theological views as Pope Benedict XVI and National Catholic reporter John Allen said he would be a pontiff who was "respected for his brains, his integrity and spiritual depth.".... 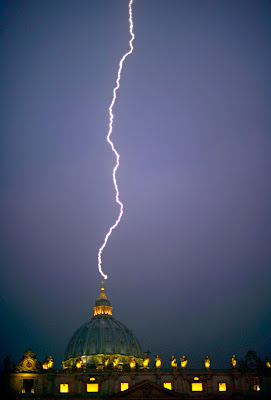 From AFP:
Hours after Pope Benedict XVI  stunned the world by announcing he would resign at the end of the month, a blinding shaft of lightning shot down from the heavens and struck the rod atop the white cross on St. Peter’s Basilica at the Vatican.  Imagine the odds.  But here’s where it gets even more Twilight Zone: At that precise moment, AFP photographer Filippo Monteforte – his camera already trained on the Basilica’s cupola – pushed the button that yielded the image above.  A miracle?  Not quite.

“I took the picture from St. Peter’s Square while sheltered by the columns. It was icy cold and the rain was falling in sheets. When the storm started, I thought that lightning might strike the rod, so I decided it was worth seeing whether – if it DID strike – I could get the shot at exactly the right moment.” Armed with a 50mm lens, Filippo waited. And waited. More than two hours. And then it happened. Twice. “The first bolt was huge and lit up the sky, but unfortunately I missed it. I had better luck the second time, and was able to snap a couple of images of the dome illuminated by the bolt.”