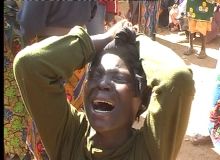 It's the pic of a mourning Nigerian woman who was  attending the funeral service where murderous muslims opened fire for a full 10 minutes firing into the crowd of mourners and killing several of  them.  Is the depth of her sorrow measurable?   Were the funeral services for her father, her mother, her brother, her sister or maybe her husband or maybe her child ?  Who knows... all we know is that the poor soul is now in anguish over more deaths in her family while the so called Judeo-Christian countries are dancing around to the captivating music of Political Correctness.

.... Six people died and many others were injured when unknown gunmen attacked Aduwan Gida Village in the Zangon Kataf Local Government Area (LGA) of Southern Kaduna during the evening of 23 February.

The attack occurred at around 10pm, as villagers gathered to mourn the death of an elderly member of the community. Armed assailants are reported to have fired indiscriminately for around ten minutes, and fatalities are said to include a nursing mother and her six-month-old baby. The injured are being treated in hospitals in Kaduna and Plateau States.

The Reverend Yunusa Nmadu, CEO of Christian Solidarity Worldwide-Nigeria (CSW-N), said, “It is unfortunate that after the announcement of a ceasefire by elements of Boko Haram, we are still experiencing attacks resembling their style of operations. We ask for continuing prayers for Nigeria, and urge churches to be vigilant with regard to security, particularly as the Easter period approaches.”

The attack on Aduwan Gida constitutes the second night attack on predominantly Christian villages in as many days, and follows a period of relative calm.

In neighbouring Plateau State, ten members of the same family were hacked to death and two sustained gunshot wounds when unknown assailants stormed Kogwom Village in Vom district in Jos South LGA during the early hours of 22 February. According to local reports, the family had lost a grandmother a few days earlier and family members were gathered at the family compound for her for her funeral. The injured are currently receiving treatment at an undisclosed location.

In both cases, locals expressed anger at what they perceive as ineffectiveness on the part of security forces stationed in their respective areas.

CSW’s Advocacy Director Andrew Johnston said, “We are saddened by these attacks on communities that were already in mourning, and send our heartfelt condolences to the relations and friends of those who died over the weekend in Plateau and Kaduna States.  Given the long-standing nature of the threats against both areas, the security services should by now have formulated an effective means of defending villages and apprehending assailants. We urge those responsible for security in these areas to formulate effective arrangements to secure the lives and properties of innocent citizens and to forestall the very real possibility of people taking the law into their own hands.”