This is an excellent movement and should be copied by all Western nations still having a few gutsy citizens willing to show that we will not stand  by and take it anymore.  If  our politicians have failed us, we will take matters in our own hands to fight this plague.

From FrontPageMag:
“Israel Apartheid Week” is a common blood libel on college campuses, hosted every year by hate groups such as the Muslim Students Association and Students for Justice in Palestine. These hate weeks are designed to de-legitimize Israel and soften it up for the kill, claiming that it is an apartheid state and should be isolated. The declared goal of Hamas and the PLO is to “liberate” Palestine “from the river to the sea” – in other words, to destroy the Jewish state and push its inhabitants into the sea...... 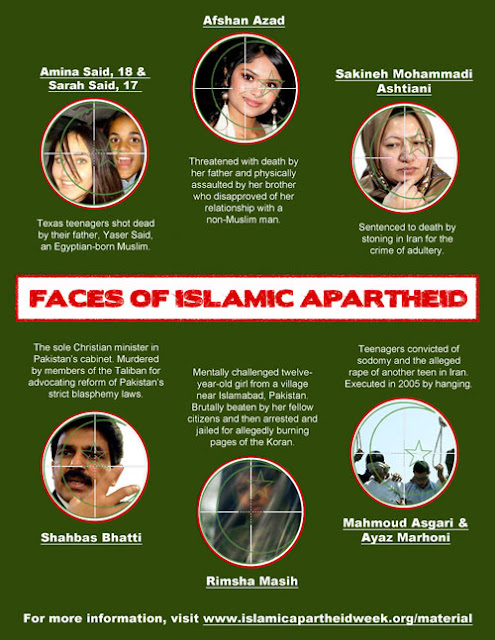 ...........Until now, there has been no national campaign to expose the brutal discrimination that occurs under Islamic Sharia law. But this spring, the David Horowitz Freedom Center is sponsoring “Islamic Apartheid Weeks” on over 50 campuses. These weeks will elaborate on the many forms of Muslim apartheid that have been integral to the Middle East for over a millennium and can now be seen in other regions of the world such as Africa: religious intolerance, ethnic inequality, racism, gender discrimination, denial of citizenship, political oppression and slavery, among others........

....The centerpiece of each week will be panel discussions and keynote speeches featuring former victims of Sharia law and Islamic supremacism, including dissidents such as Nonie Darwish and Simon Deng, and experts on political Islam, such as Pamela Geller, Robert Spencer, and Andrew C. McCarthy. We will also be providing students with a full compliment of resources, such as pamphlets, flyers, and films highlighting the various human rights abuses sanctioned under Sharia law. Groups like Students for Justice in Palestine are in fact partially right: there is apartheid in the Middle East. It’s just that it’s being practiced by the Arab Muslim nations, and the David Horowitz Freedom Center is setting out to make that abundantly clear.

Islamic Apartheid Week events have already occurred or have been planned at these campuses so far: