What else can go wrong with the Church?  This chapel in the grounds of the Allegheny College in Meadville, Pennsylvania started off as a Catholic place but has morph into one of those "diversity" hellholes that we keep hearing about.

This kind of thing is just one of the reasons why atheists label Christians as hypocrites.   While some clergy are screaming their heads off banning  sex outside marriage, homosexuality, bestiality,  etc .... there's an even greater number who are working for the propagation and promotion of sexual depravity.  Why is sex education needed for crying out loud?  Are we going to wilt and die if we don't get any?  Instead of  educators teaching kids how they can learn to depend on themselves by becoming financially independent and how to go about achieving that goal,  the depraved ones are teaching kids to climax instead.

Katie McHugh writing at  TheCollegeFix:
Allegheny College’s Ford Memorial Chapel was transformed into a boudoir of sorts Wednesday night, as professional sex educators advised students in attendance how best to touch themselves and their partners to reach orgasm in what was billed as an educational seminar. 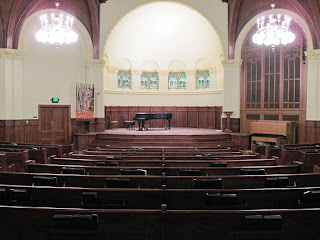 The chapel, built and dedicated in 1902, is where Catholic mass and non-denominational services are conducted every week at the private liberal arts college in northwestern Pennsylvania. But all that took a back pew to Wednesday’s festivities, dubbed “I Heart the Female Orgasm” and hosted by a variety of student groups on campus.

“Sometimes it can be difficult finding your G spot by yourself, because it involves inserting a finger or fingers inside the vagina into the front wall of the body, and that kind of results in an awkward, kind of clawlike hand position,” Weinberg said, demonstrating with a pawing motion as the audience giggled. “Obviously, there are better ways you can position your body. Or if you’ve got a partner, you can get your partner to insert their finger or fingers inside your vagina in the front wall of your body in a sort of a J curve.”

Miller also weighed in, noting “some (women) find that if they change the angle or position, they can find some way of rubbing against their partner’s body, against the base of his penis or pubic bone, and with rubbing to have enough stimulation to orgasm in intercourse.”

In statements to The College Fix, the college’s chaplain defended the event’s location, calling its theme “responsible,” and a campus spokesperson said it offered a “great message.”

While the chapel is hosting services in conjunction with Lent, on Wednesday the building turned into a sexual marketplace of sorts, as student groups sold buttons, t-shirts and hats bearing the program’s name inside the chapel itself after the event concluded. They also sold the book written by program coordinators Marshall Miller and Dorian Solot titled “I Heart Female Orgasm: An Extraordinary Orgasm Guide.”.....