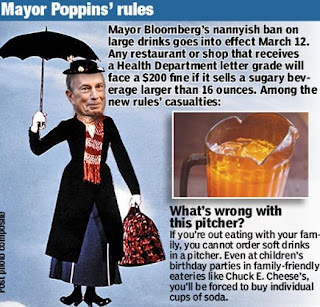 When people become senile, nothing they do makes sense.  What is even worse, is the fact that there are millions of New Yorkers  who are  bloomers themselves for having re-elected this insane person to be their mayor.

Brad Hamilton and Susan Edelman writing at NYPost:
Take a big gulp,  New York: Hizzoner is about to give you a pop.

Nanny Bloomberg unleashes his ban on large sodas on March 12 — and there are some nasty surprises lurking for hardworking families.
Say goodbye to that 2-liter bottle of Coke with your pizza delivery, pitchers of soft drinks at your kid’s birthday party and some bottle-service mixers at your favorite nightclub. 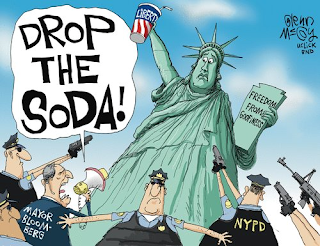 And merchants were shocked to see the broad sweep of the new rules.
“It’s not fair. If you’re gonna tell me what to do, it’s no good,” said Steve DiMaggio of Caruso’s in Cobble Hill, Brooklyn. “It’s gonna cost a lot more.” 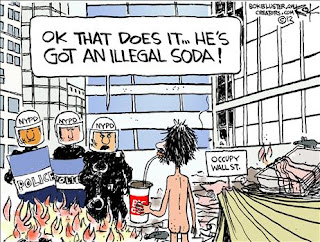 And consumers, especially families, will soon see how the rules will affect their wallets — forcing them to pay higher unit prices for smaller bottles.

Typically, a pizzeria charges $3 for a 2-liter bottle of Coke. But under the ban, customers would have to buy six 12-ounce cans at a total cost of $7.50 to get an equivalent amount of soda.

Domino’s on First Avenue and 74th Street on the Upper East Side is doing away with its most popular drink sizes: the 20-ounce and 2-liter bottles.

“We’re getting in 16-ounce bottles — and that’s all we’re going to sell,” a worker said.

He said the smaller bottles will generate more revenue for the restaurant but cost consumers more. 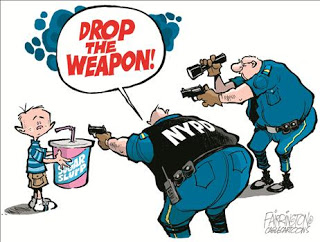 It will also trash more plastic into the environment.

Deliveryman Philippe Daniba said he had brought countless 2-liter bottles of soda to customers over his 19 years at the restaurant. The ban, he said, “doesn’t make sense.”