Are you loving this?


I sure am!!   People on a witch hunt should be made to pay when their malice towards others not only puts those individuals in a financial loss but also makes them lose their calibrations on their daily routine, be it work-wise or on the family front.

The article has a poll asking whether Paul Magder should foot the bill.  The numbers made me grin and the day's not over yet.

Don Peat writing at TorontoSun:
....You mess with the bull, you get the horns. 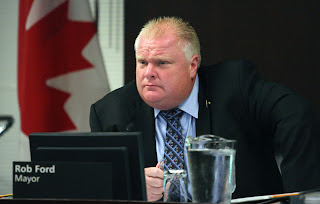 So if you take Mayor Rob Ford to court and lose, you’re going to be asked to foot the bill.

Ford — who won an appeal of his conflict of interest case last month — is now asking Paul Magder, the resident who took him to court in the first place, to cover the more than $116,000 plus HST in legal costs he incurred fighting to keep his butt in the mayor’s chair.

According to the factum obtained by the Toronto Sun Friday, Ford’s legal team logged around $107,070 worth of hours plus $8,974 in costs to prepare for the case including photocopying, telephone charges and courier service.

Lenczner argues the costs requested are “entirely reasonable” given the fact Magder’s lawyer Clayton Ruby submitted a bill on behalf of Magder following the first trial for more than $150,000 — $125,850 for fees and $7,554.03 for disbursements plus HST.

In the factum, Lenczner goes on to argue the court shouldn’t be concerned that Magder will have to indemnify his legal team because Ruby has made it clear he was working on the case “pro bono.”

“Paul Magder understood even before the inception of his application that, if he was successful, his lawyers would receive costs from Ford which they would keep in their entirety,” Lenczner states.

“He also understood that, if he was unsuccessful, he would have to indemnify Rob Ford for his costs on a partial indemnity basis but not be required to pay his own lawyers.”

The court filing reveals Lenczner spent 115.3 hours preparing for the original trial and appeal at a partial indemnity rate of $350 an hour along with 3.5 days in court.

Ford wouldn’t speak about the case Friday at City Hall.