The blasted idiots are so very illiterate and downright stupid, they even destroy edifices belonging to their own cult.  If not for the fact that they interfere in our lives here in our own countries, these damn fools would be a constant source of never-ending hilarity with their clownish antics and  behaviour patterns that are  funnier than a murder of crows lamenting their dead.   I have seen such a spectacle and it's funny, but only if you are watching from behind a glass window several yards away.


Dr.Pipes at his blog on July 2.   For links to all statements in the list, please visit his blog. 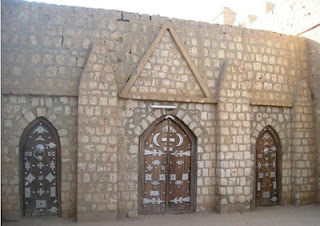 The Islamist destruction underway in Timbuktu (including the tomb of Sidi Mahmoudou, d. 955, and the doors of the Sidi Yahya Mosque, ca. 1400) raises a question: What is it about Islam that so often turns its adherents against their own patrimony? Consider some examples:
The destruction of Hindu temples in medieval India.
The Mamluks using the Great Sphinx of Egypt as target practice and the Great Pyramid as a quarry.
The Turkish destruction of churches in northern Cyprus since 1974.
The Saudi destruction of antiquities in Mecca since the 1990s,
The Palestinian sacking of the Tomb of Joseph in 2000.
The Taliban destruction of the Bamiyan Buddha in 2001.
Al-Qaeda's bombing of Ghriba synagogue in Tunisia in 2002,
The pillaging of Iraqi museums, libraries, and archives in 2003.
The destruction of an historic Malaysian Hindu temple in 2006.
The destruction of L'Institut d'Égypte in 2011.
In addition, some intentions to destroy antiquities (Khomeini contemplated razing Persepolis, a grand mufti of Egypt banned exhibiting statues) might yet be realized. (On the other hand, the story about Muslims burning the ancient Library of Alexandria appears apocryphal.)
Although these examples include both non-Muslim and Muslim artifacts, motives differ in the two cases: eliminating infidel remnants establishes the superiority of Islam, while eliminating Muslim ones establishes the superiority of Islamism. In both cases, the motive is foul and the results are, historically speaking, tragic.