A whole lot of news from Syria here ... but only if you can tear yourself away from Kim Kardashian and Angelina Jolie


1) Lots of info in the article below, but knowing how the Grey Lady is a mistress of the WH, take everything you read with a pinch of salt.   Neil  MacFarquhar reporting in NewYorkTimes with Dalal Mawad and Hwaida Saad as contributors:
July 25 BEIRUT, Lebanon — The clamorous heart of Aleppo,    the ancient city with its cobbled streets and mazy bazaars, fell silent on Tuesday as residents there and across Syria’s sprawling commercial capital fled the streets and cowered indoors, dreading the rat-tat-tat of machine gun fire and the echoing roar of government helicopters.
Except for the helicopters, the government disappeared, said residents reached by telephone. There was no army and no traffic police, and all state employees were ordered to stay home, warned via official television broadcasts that they would be targeted by the rebel street fighters infiltrating central neighborhoods.

“People are still in shock that this is happening — they thought it would be limited to one neighborhood, but it is growing in size to other neighborhoods,” said Fadi Salem, an academic visiting his family. “They are scared of chaos and lawlessness more than anything else.”
Residents said there were clashes not just between the government and the insurgents, but also between rival militias from the countryside fighting for control of individual streets in at least one southern neighborhood. In a central old quarter, one man said a friend had warned him not to visit because young gunmen had established a checkpoint to rob car passengers........ 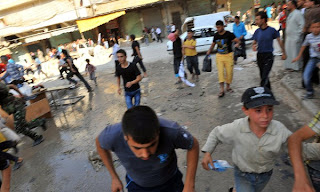 .....In Washington, the secretary of state, Hillary Rodham Clinton, speaking as though the Syrian insurgency’s momentum was now unstoppable, said its territorial gains might be leveraged into safe havens. “We have to work closely with the opposition,” she told reporters, “because more and more territory is being taken and it will, eventually, result in a safe haven inside Syria, which will then provide a base for further actions by the opposition.”........

2) July 26 ....Rebel fighters also continued to arrive from surrounding areas, activists said. Although the insurgents claimed to have destroyed police stations in two neighborhoods, they were repulsed when they tried to take over two others, said Majed Abdel Nour, a spokesman in the city for the Shaam News Network, an antigovernment activist group.
The possibility of a major battle for Aleppo came as Turkey’s prime minister injected a new element of tension into the Syrian conflict, asserting that Syrian forces had abandoned territories close to the Turkish border that have since been occupied by Kurdish militants hostile to Turkey.
The Turkish prime minister, Recep Tayyip Erdogan, told reporters in Turkey that his country’s armed forces would “take whatever steps are necessary against terrorism” in these areas, foreshadowing possible Turkish military incursions into Syria, similar to Turkey’s incursions into areas of northern Iraq where Kurdish militants have sought sanctuary.......

3) The cancerous Saudi Arabia has a solution:  AFP via Yahoo reporting that  Saudi Arabia is proposing a UN General Assembly resolution which will highlight a Syrian government threat to use chemical weapons, its UN envoy said Wednesday.
The new Arab initiative follows the failure of a western-attempt to get the UN Security Council to threaten sanctions against Syria's President Bashar al-Assad over the 16-month-old conflict, diplomats said. Russia and China vetoed the council resolution last week.
Saudi Arabia's UN Ambassador Abdallah al-Mouallimi told a small group of reporters the resolution would be submitted in coming days and he hoped for a vote "probably early next week." 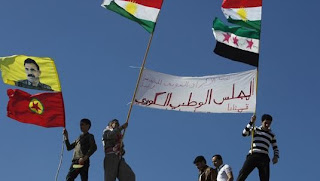 Asked whether the resolution would mention the Syrian government's threat made this week to use its chemical weapons if attacked, al-Mouallimi said "it will reference all of the issues that are of significance in the Syrian situation."
UN diplomats said the resolution could call on the 193 UN member states to follow sanctions that have been ordered against Syria by the Arab League. That would be opposed by Russia and China after their veto last Thursday..........

4)July 24 NYTimes's Rod Nordland writes: Al Qaeda Taking Deadly New Role in Syria’s Conflict. It is the sort of image that has become a staple of the Syrian revolution, a video of masked men calling themselves the Free Syrian Army and brandishing AK-47s — with one unsettling difference. In the background hang two flags of Al Qaeda, white Arabic writing on a black field.
“We are now forming suicide cells to make jihad in the name of God,” said a speaker in the video using the classical Arabic favored by Al Qaeda.
The video, posted on YouTube, is one more bit of evidence that Al Qaeda and other Islamic extremists are doing their best to hijack the Syrian revolution, with a growing although still limited success that has American intelligence officials publicly concerned, and Iraqi officials next door openly alarmed.
While leaders of the Syrian political and military opposition continue to deny any role for the extremists, Al Qaeda has helped to change the nature of the conflict, injecting the weapon it perfected in Iraq — suicide bombings — into the battle against President Bashar al-Assad with growing frequency.........