More Blood and Gore from the Religion of Pieces


No photo-finish required to determine the winner of the latest 5-day KillKillKill contest.   Iraq topped with 66+ dead and countless others wounded.  Kenya and Nigeria slaughtered more than 27 Christians and left many more wounded.   Pakistan took a breather with just 6 kills.... killing is exhausting, don't you know.  Afghanistan carried on their genocide against women and students with more than 13 killed + 3 British soldiers.  Let the One World Government start collecting another 16 Billion Dollars even before the first 16B is depleted so the Afghan govt. can merrily go about permitting the Taliban to keep killing.  Why do I have this feeling that the Afghan situation is gonna be like the Palestinian refugee situation??  Nobody in their right mind will let go of so much moolah.  The corrupt Afghan govt. will find a way to make the world continue sending them more and more. 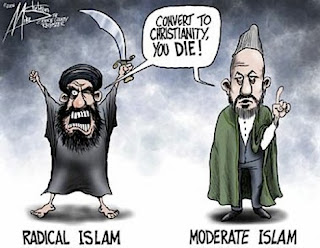 2012.07.05 Iraq Mosul A Shahid suicide bomber detonates inside a barber shop, sending at least five others to Allah.
2012.07.04 Pakistan  Kuchlak  Lashkar-e-Jhangvi gunmen murder three Religion of Peace rivals.
2012.07.04 Afghanistan  Marjeh   A woman is taken out by a Taliban roadside bomb.
2012.07.04 Pakistan   Bahawalpur A mentally-ill man is tortured, doused with petrol and burned alive by a mob angered over reports that he burned a Quran.
2012.07.04 Kenya Mandera   Somali militants shoot a 16-year-old girl several times in the chest.
2012.07.04 Nigeria Borno Two employees at a housing complex are chased down and murdered by Boko Haram radicals.
2012.07.04 Pakistan  Pasrur  A pregnant woman and her baby are shot to death by Wahhabis because they were Shia.
2012.07.04 Iraq Zubaidiyah One child and two women are among eight dead when Sunnis detonate a bomb at a Shiite market.
2012.07.03 Thailand  Yala A 49-year-old Buddhist is dismantled by Muslim bombers while on his way home.
2012.07.03 Iraq  Diwaniya Sunnis set off a powerful bomb near a Shiite mosque, taking down at least forty Religion of Peace rivals.
2012.07.03 Iraq  Karbalah Eight Shiite worshippers are sent straght to Allah by Sunni bombers at a vegetable market.
2012.07.02 Afghanistan  Kandahar A Shahid suicide bomber detonates near the entrance of a university, killing seven students and staff.
2012.07.02 Yemen Sanaa A Yemeni is killed by a suspected al-Qaeda car bomb.
2012.07.02 Egypt Suez A 20-year-old engineering student is stabbed to death by religious police for walking with his girlfriend. 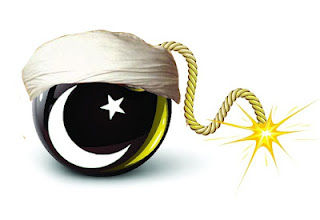 2012.07.02 Iraq  Baghdad  Jihadi bombers take out a traffic cop.
2012.07.01 Kenya Garissa Muslims throw grenades into two churches and then shoot fleeing Christians. Some eighteen die in the massacre, including three children..
2012.07.01 Nigeria Maiduguri  Nine Christian construction workers have their throats cut by Islamists in a 'gruesome' killing.
2012.07.01 Dagestan  Khasavyurt An off-duty cop is gunned down in a Muslim drive-by.
2012.07.01 Afghanistan  Helmand A Taliban disguised in police uniform murders three British soldiers.
2012.07.01 Iraq  Baghdad  Terrorists kill three people including a judge.
2012.07.01 Pakistan   Faisalabad A man is beaten and 'severely tortured' by a mob for 'defaming' prophet Muhammad with remarks.
2012.07.01 Afghanistan  Ghazni  Five women and children are ripped apart when the Taliban bomb their bus.