This is Afghanistan and will always remain so ..... unless


Canada wants to make it Canada II by staying put there for keeps. Western nations cannot bring a change in muslim nations if the muslims residents are against it. The 10% of the population in those countries, who happen to attend the cocktail parties and dinners given by the embassies there and engage the embassy folks in chit-chat using the English language and can show off western-style dress mode and can juggle a fork, knife and spoon at the dining table ... does not mean that 90% of the populace are willing to let the 10% rule over them. The change has to come from within or not at all. 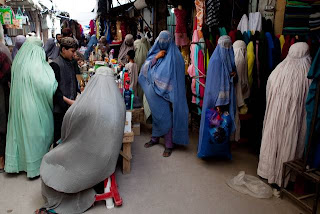 Show me one muslim country that was invaded by either the British or French or of late the USA or NATO that has improved themselves because of western arm-twisting. You can't.  A lot of people thought,and still think that the West managed to bring democracy  to Iraq ..... really?          hahahahhaaha.
One month after a young woman was shot dead in broad daylight on a main street in the center of Kandahar, assassins have claimed another female victim in their apparent war against women who work in peace and rehabilitation programs.

Rabia Sadat, 22, was leaving her home Tuesday morning at about 8:30 to go to work when two gunmen on a motorcycle pulled up and shot her dead with a pistol. Her driver was also shot but survived.

Rabia had been working at the National Solidarity Program, which is part of the government’s Rural and Rehabilitation Department, for a year and a half when she was killed..........