Why did the Jewish people let the major part of  their land be taken away by brick layers and laborers whom they employed to build it ? Are we set on doing the same thing to the Canadian landscape? When one is kind and generous to a fault when dealing with scum who have the very worst of intentions, it's easy to imagine that what happened to Jews and Christians in the Middle East can very easily happen to the peoples of Europe and North America. The Jews there must have been thinking the same thoughts most of us are thinking right now "Naw, we are too smart for that. It's not gonna happen."  Really? Really? Really? 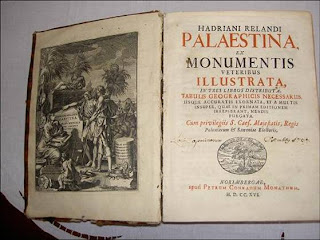 .... 1. Not one settlement in the Land of Israel has a name that is of Arabic origin. Most of the settlement names originate in the Hebrew, Greek, Latin or Roman languages. In fact, till today, except to Ramlah, not one Arabic settlement has an original Arabic name. Till today, most of the settlements names are of Hebrew or Greek origin, the names distorted to senseless Arabic names. There is no meaning in Arabic to names such as Acco (Acre), Haifa, Jaffa, Nablus, Gaza, or Jenin and towns named Ramallah, El Halil and El-Kuds (Jerusalem) lack historical roots or Arabic philology. In 1696, the year Relandi toured the land, Ramallah, for instance, was called Bet'allah (From the Hebrew name Beit El) and Hebron was called Hebron (Hevron) and the Arabs called Mearat HaMachpelah El Chalil, their name for the Forefather Abraham.

2. Most of the land was empty, desolate, and the inhabitants few in number and mostly concentrate in the towns Jerusalem, Acco, Tzfat, Jaffa, Tiberius and Gaza. Most of the inhabitants were Jews and the rest Christians. There were few Muslims, mostly nomad Bedouins. Nablus, known as Shchem, was exceptional, where approximately 120 people, members of the Muslim Natsha family and approximately 70 Shomronites, lived.

The interesting part was that Relandi mentioned the Muslims as nomad Bedouins who arrived in the area as construction and agriculture labor reinforcement, seasonal workers. .........

3. The book totally contradicts any post-modern theory claiming a "Palestinian heritage," or Palestinian nation. The book strengthens the connection, relevance, pertinence, kinship of the Land of Israel to the Jews and the absolute lack of belonging to the Arabs, who robbed the Latin name Palestina and took it as their own. ..........