Russia vs Obama the dumbo prez 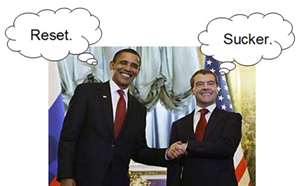 Obama might not have the best interests of America when he cluelessly commits all those crimes against his country, but the Russian politicians love Mother Russia.... gotta admire them for that without whimpering about their "commie-ness."  Just over a year ago the nitwit Obama (if you would prefer to think he is dumb as dumb can be) or the crafty Manchurian prez (if you suspect he is doing exactly what he was trained to do)   signed these foolish documents that no other American president would even take a sniff of ... ok, maybe Carter.

Now, as expected we see the results of Obama's stupidity even before the ink has dried on those papers. 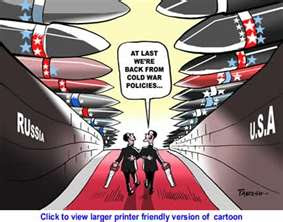 Russia will station missiles in its westernmost Kaliningrad region and other areas if Russia and NATO fail to reach a deal on the U.S.-led missile defense plans, he said in a tough statement that seemed to be aimed at rallying domestic support.

Russia considers the plans for missile shields in Europe, including in Romania and Poland, to be a threat to its nuclear forces, but the Obama administration insists they are meant to fend off a potential threat from Iran......